DRAW ME IN by MEGAN SQUIRES ~ Review & Giveaway 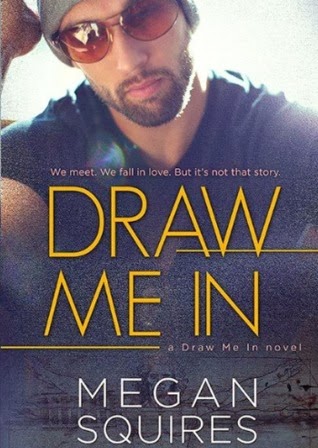 DRAW ME IN
By: Megan Squires
Set to Release on Jan. 7th
GOODREADS LINK

He’s a young, up and coming businessman with the keys to his family’s Italian wine enterprise.

I’m a fine arts student, navigating life in the Big Apple, my pencil and sketchpad in hand.

We meet. We fall in love.

But it’s not that story.

Sometimes, by a rare gift of fate, two lives cross paths. And hey, if that happens to occur when staring at Michelangelo’s naked masterpiece, even better. We can tell our future children how a seventeen-foot tall marble guy named David brought us together.

But there’s always more to a relationship than its beginning and ever after. In life, there’s a whole lot of backstory. There are ex-fiancés and hot roommates and family members whose advice continues, even beyond the grave.

There is always more that draws you in.

“Good morning, Leo.” Sofia's accent was thick, but the sultriness coating each of her words was so much thicker. She bent at the waist to gather her hair into a ponytail and stood back up quickly, certain body parts jiggling a little as they fell back into place in a good jiggling sort of way. Nothing on my own body jiggled seductively like that.

Sof? Had she all of a sudden become a couch? At least my nickname, Jules, was likened to diamonds. That was one place where I appeared to have the upper hand and I would take it and flaunt it for all it was worth.

But then I thought of what people often did on couches and I supposed that could be construed to be better than jewelry. Couches could be a lot of fun. I’d had a lot of fun on couches in my day. So they would probably beat out jewels every time. Unless we were talking about the family jewels here, in which case I so won that. If you asked a guy if he’d rather keep his couch or his balls, I was fairly certain the answer would be obvious. Booyah!

“Are you okay?” Sofia drew her head back a little and looked at me like I might be a monkey or something equally as out of place in the Carducci living room.

“Gesundheit,” Leo quickly recovered for me, even going so far as to pull a handkerchief out of his lapel pocket and flutter it my way. “Julie’s coming down with something.”

“I am.” I nodded and lifted the rag to cover my face in its entirety. How long could I hide behind it without that seeming strange? Three, four days?

When I found out this book was about a billionaire, 20-something year old, guy and a young art student, I thought I was going to be reading something similar to other stories I have already read. Boy, was I wrong. This is a heartfelt story about so much more than lust and romance.

I don’t need many words to tell you how I felt about ‘Draw me In.’ It was wonderful and refreshing. In the end, it gave me hope that there are authors out there who are willing to write books that cater to the type of reader I am.

Julie and Leo are such perfection. If they were in a movie together I know it would be hard to take your eyes off of them. They each share enough emotion to draw you in but not drown you. As the story develops, each little piece that is shared brings you to a place where you are ready to accept the ending. Although I didn’t want the ending to come.

I loved the progression of the relationships in this book. Not just the two who were in the spotlight, but also the supporting characters. Ian, Julie’s roommate, was a great addition to the story, along with several others.

My favorite quote from this book came early on and it rang so true to me.

“Life is meant to be shared.”

When you come to end of the final chapter, you will look differently at the people you choose to share your life with. You’ll be grateful.

This was the first book of Megan’s that I have read. I will definitely be reading more!

1. A main character who is a billionaire in his twenties – but wait – he has respect for woman, he loves art and he OWNS a winery? Yes, ladies. Now that is a dream.

2. There are some funny moments that had me crying laughing. I mean, seriously, wiping tears from my eyes. I love a book with a little bit of funny.

3. You can feel the ending coming and you want to look away but you just can’t. You have to see how it ends and you will be so happy you did.