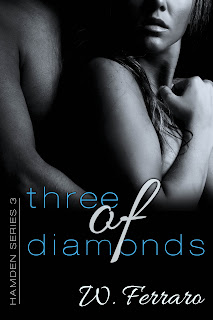 SYNOPSIS
Lola Nash’s life edges on safe and controlled, containing few people; her brother, Boyd, a handful of friends and the facility for special needs children where she volunteers, called Aaron’s Place. However, a chance meeting shatters her control when she learns someone else’s closely held secret. The kind of secret causing her explicit and sexy dreams, all centering around Wes Thompson; known as Adonis in the ultra-exclusive world of the sex club, Olympus. Wes is intrigued by the voluptuous beauty who won’t give him the time of day. Like the God he emulates, he has never been the type to give in when he wants something or someone; Lola is exactly what he wants. Is Lola the one that can bring a God to his knees or will Wes conquer her, and then walk away as planned? Is the chance at love worth the cost of giving up everything you hold important? When the cards are down, will Wes and Lola call or fold?
THREE OF DIAMONDS ON GOODREADS 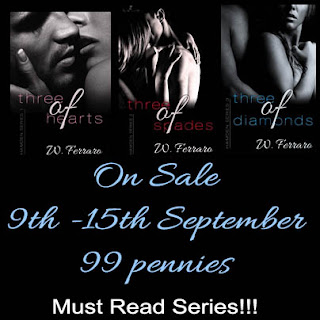 INTERVIEW WITH WES AND LOLA
RG:  Lola, things have not been very easy for you, how did you manage to deal with all of your struggles with such grace?

LOLA:  Having Grace, ha ha, that is one thing I don’t think I’ve ever been accused of Stephanie, how nice of you to say so. I just try to make the best out of every situation. Working hard and never letting anything stand in my way has just always been my motto. Somethings are more pleasant than others but that’s life.

RG:  What’s would you say are the biggest challenges and rewards of raising a special needs child?

LOLA:  I think there are many challenges and rewards to raising any child regardless if they are special needs or not. I learned just as much from Boyd as he did from me. I’ m not going to lie, some days I feel like pulling my hair out, but to know he is happy, makes it all worthwhile. I can’t really being too bad of a job, right?

RG:  Can you describe how you felt your first night on Olympus?

LOLA:  I was terrified. Not because of the atmosphere, but rather because I was so desperate for the money and ultimately, the job. I knew I could do the job; it was the head stuff I had trouble with. I’m not knocking anyone’s tastes just you can’t walk into something like that and not be a little overwhelmed regardless of your type of participation.

RG:  Knowing what you knew about Wes, what is it that ultimately drew you to him?

LOLA:  His tenacity, I guess. No matter how many times I tried to halt his advances, he just continued to come at me. I guess, I was glad he did. I was entitled to some fun, and he seemed the safest kind, at the time that is. Boy, did I get more than I signed up for. (insert wide grin and pure joy laughter)

RG:  What’s one thing people might not know about Wes?

LOLA:  Hmmm, let me think…I can’t let you in on all the secrets. Oh I know, I bet you didn’t know he carries a collage on the inside of his briefcase lid of all the things both Boyd and Keegan make for him. Regardless of how silly or sentimental he displays them with pride, and happily shows anyone that will look. That and he insists on ironed sheets.

RG:  What was it that gave you the desire to create a place like Olympus?

WES: I wanted to create a safe and private environment for people like me that prefer more than usual sexual tastes. It was important to have a non-judgment zone and place where everyone could be comfortable in his or her sexual appetites.

RG:  Were you ever worried that the people closest to you would judge your “preferences” if they found out?

WES:  Most definitely. That still remains a fear to me. I tried to do everything in my power to protect mine and ultimately everyone else’s privacy. I succeeded for a long time.

RG:  Lola really got to the heart of you. What was it about her that allowed you to open up?

WES:  She showed me what my self-made walls were keeping from me. How life didn’t always have to be planned out. But, most of all, she showed me my weaknesses. Rather than use them against me, she tried to save me from them.

RG:  What’s one thing people might not know about Lola?

WES:  She is a damn good cook. The boys and I are very lucky to have her, but also, she is the reason we will all need our pants let out.

RG:  Was there anything written about you in Three of Diamonds that you would change?

WES:  My name. (insert hearty laugh) you know, names are changed to protect the innocent. That’s me, completely innocent.

RG:  The most important question. Boxers or Briefs?

RG: What do you guys do for fun nowadays?

WES:  There are lots of nights filled with board games and blanket forts.
LOLA: To me those are the most fun, but don't forget he ice cream either.

RG:  What's your idea of the perfect date.

LOLA:  A table in darken corner of a piano bar with a bottle of wine and a plate of oysters.
WES: Anywhere my wife is.

RG:  What would you say each others worst habits are?

WES:  (turning to Lola) Don't you dare!
LOLA:  But, she asked Love.
WES:  Isn't there a marital degree of confidence?
LOLA:  Not with Stephanie. I tell her everything!
WES:  Turnabout is fair play.
LOLA:  SHIT! in that case, I'll remain mute. Even though your ability to recant every line from all the 80's Saturday Night Live cast's cheesy movies are going to be my downfall.
WES:  They are not cheesy...they are classic. Stephanie don't you agree?

RG:  Well Wes you do make me weak in my knees BUT.... I might have to agree with Lola!
Thank you both for stopping by!

When I pick up one of Wendy Ferraro's books I know I am in for a steamy emotional read. Three of Diamonds was just that and so much more.  Wendy's writing style ebbs and flows whereby pulling you into the Hamden men world.  This is a HOT 5 star read!

Lola Nash is mature beyond her years.  This is not by choice, her mother (and I use that term loosely) thought of child bearing as an accessory.  Lola was pretty much abandoned at a very young age, then at twenty-two her mother shows up with a two year old little boy asking Lola to raise him.  Boyd has a big innocent heart and also one extra special chromosome. From that day on Lola has lived her life for the better of Boyd's.  Years pass, and the duo moved around the country seeking a "home" and they finally landed in Hamden.  Life is not financially easy for Lola and Boyd but they make the best of it.  Lola works as a bartender most nights.  Her life was forever be changed once she applied for a job at Olympus.... Little did she know just where or what she was getting herself into.

"Look, I know this isn't the best place to live and I know I'm probably not the type you are usually interested in, but I'm not embarrassed for any of it.  I would do it all over again.  The only thing I would choose to change would be letting Boyd remain with her for the first two years."

Wes Thompson is one amazing specimen .... He is controlled, driven and under his amazing exterior Wes is searching..... He is searching for something more out of life and when he meets Lola everything he ever believed is questioned.

"I've never known such a thing existed that would make me change how I'm wired. But there is. It's you. Every moment I'm with you, I want it to multiply times infinity."

Wes and Lola meet in one of the most unconventional "dating" settings. Their attraction is apparent almost immediately! As their paths continue to cross at every turn, Wes becomes more and more determined in pursing Lola.

"Do you think I've ever sat and talked with anyone in bed, like I do with you? Do you think I've invited a woman to spend the night here with me, with her brother, completely okay with no definite sex on the menu? Not a chance!"

Wes and Lola's relationship is not with out its flaws.  Can they over come their differences to see what is right in front of them?  Will Lola let down her walls whereby letting Wes into her heart and family?

Wendy Ferraro is an extremely talented author who can give us steamy sex with a whole lot of class! It has been an honor to watch Wendy's writing evolve. I read and reviewed Three of Spades HERE!

Grab her latest book in the Hamden Men series!

I live in New England with my young family. I'm a stay at home mom to two very active children. For all of you who are familiar with the stress of this job, I decided to complete an item on my bucket list and write a book. When I'm not writing, you will find me cooking, reading, shopping or being silly with the kids.

I wish you all happy reading and hope you fall in love with the men of Hamden.