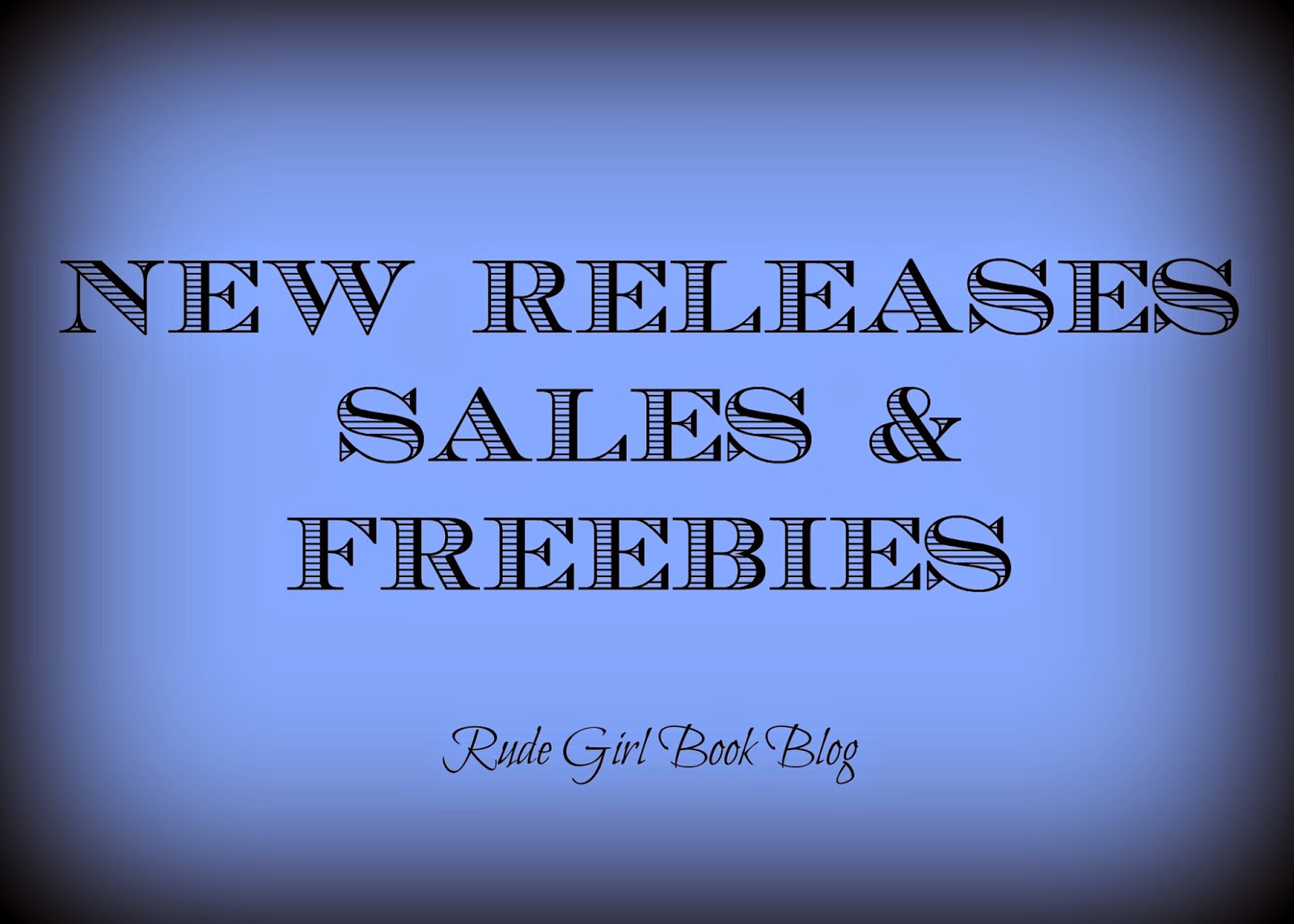 WOW!!! It has been a busy week for NEW RELEASES, SALES and FREEBIES ♥︎♥︎♥︎
I updated the SALES & FREEBIES sections just in time for your weekend reading!!!
Grab a few great reads, curl up and enjoy!

Crushed by Lauren Layne ~ RG’s Review is HERE
This is the second book in the Redemption series.  Crushed is filled with priceless banter, humor and sexual tension!

SYNOPSIS
Lauren Layne’s latest novel about the healing power of redemption tells the story of a crush gone wickedly wrong, proving that what you want isn’t always what you need.Growing up in New York, Michael St. Claire never expected to spend his twenties wearing cowboy boots. But that was before he learned about his real father, a total stranger with a family in Cedar Grove, Texas. Once in the Lone Star State, Michael meets Kristin Bellamy, who is exquisitely refined and everything Michael always thought he wanted in a woman. The only problem is that Kristin is dating Michael’s new half brother, Devon.Kristin’s mouthy, curvy sister Chloe has always been in love with Devon Patterson. So when Michael offers to help Chloe break up Devon and Kristin, Chloe agrees to a deal that seems too good to be true. Before long, Chloe finally gets her man, only to make a startling discovery: She no longer wants the guy she had to fight for—she wants the one who stood by her side.After all he and Chloe have been through, Michael swears he’s damaged goods. Can Chloe convince him that love is worth the risk?
Series Reading Order: #1 Broken   #2 Crushed (Each book can be read as a Standalone)

Beautiful Secret by Christina Lauren
This is Niall Stella (who we met in BEAUTIFUL BELOVED) and Ruby Miller’s (who we briefly met in DIRTY ROWDY ) story.  The Beautiful Bastard series is packed with uber sexy characters and steamy storylines that do not disappoint!

SYNOPSIS
AN UPTIGHT BRITISH EXECUTIVE. AN ADVENTUROUS AMERICAN NEWBIE. A SEXY INTERNATIONAL SCANDAL IN THE MAKING.New York Times and #1 internationally bestselling author Christina Lauren’s Beautiful and Wild Seasons series hook up in Beautiful Secretfor an erotic intercontinental romp that celebrates the best of both worlds!When Ruby Miller’s boss announces he’s sending her on an extended business trip to New York City, she’s shocked. As one of the best and brightest young engineers in London, she knows she’s professionally up to the task. The part that’s throwing her is where she’ll be spending a month up close and personal working alongside—and staying in a hotel with—Niall Stella, her firm’s top urban planning executive and The Hottest Man Alive. Despite her ongoing crush, Ruby is certain Niall barely knows she’s alive…until their flirty overnight flight makes him sit up and take notice.Not one for letting loose and breaking rules, recently divorced Niall would describe himself as hopeless when it comes to women. But even he knows outgoing California-girl Ruby is a breath of fresh air. Once she makes it her mission to help the sexy Brit loosen his tie, there’s no turning back. Thousands of miles from London, it’s easy for the lovers to play pretend. But when the trip is over, will the relationship they’ve built up fall down?

All The Rage by Courtney Summers
This is definitely a dark read.  It intrigues me and is getting high reviews so I added it to my TBR.

SYNOPSIS
The sheriff’s son, Kellan Turner, is not the golden boy everyone thinks he is, and Romy Grey knows that for a fact. Because no one wants to believe a girl from the wrong side of town, the truth about him has cost her everything—friends, family, and her community. Branded a liar and bullied relentlessly by a group of kids she used to hang out with, Romy’s only refuge is the diner where she works outside of town. No one knows her name or her past there; she can finally be anonymous. But when a girl with ties to both Romy and Kellan goes missing after a party, and news of him assaulting another girl in a town close by gets out, Romy must decide whether she wants to fight or carry the burden of knowing more girls could get hurt if she doesn’t speak up. Nobody believed her the first time—and they certainly won’t now — but the cost of her silence might be more than she can bear. With a shocking conclusion and writing that will absolutely knock you out,All the Rage examines the shame and silence inflicted upon young women after an act of sexual violence, forcing us to ask ourselves: In a culture that refuses to protect its young girls, how can they survive?

Hard to Be Good: A Hard Ink Novella by Laura Kaye
This is Jeremy and Charlie’s Story and the fifth book/novella in the very popular Hard Ink Series.
SYNOPSIS
Hard Ink Tattoo owner Jeremy Rixey has taken on his brother’s stateside fight against the forces that nearly killed Nick and his Special Forces team a year before. Now, Jeremy’s whole world has been turned upside down—not the least of which by a brilliant, quiet blond man who tempts Jeremy to settle down for the first time ever.Recent kidnapping victim Charlie Merritt has always been better with computers than people, so when he’s drawn into the SF team’s investigation of his army colonel father’s corruption, he’s surprised to find acceptance and friendship—especially since his father never accepted who Charlie was. Even more surprising is the heated tension Charlie feels with sexy, tattooed Jeremy, Charlie’s opposite in almost every way.With tragedy and chaos all around them, temptation flashes hot, and Jeremy and Charlie can’t help but wonder why they’re trying so hard to be good...

The Mad Tatter by J.M. Darhower
This standalone read is a real opposites attract romance.
SYNOPSIS
Reece Hatfield has just one rule when it comes to falling in love: don't fucking do it. There's no room in his life for another person. He can barely keep a handle on things as it is. A shadow of the man he used to be, Reece spends his days tattooing, the artist inside of him longing for the chance to do something different. Avery Moore is all dance, all the time. Ballet is all she's ever known, and she's damn good at it. Her body is her art, a living canvas that captivates Reece the first time he lays his eyes on her. He yearns to leave his mark on her body... in more ways than one. The tattooed degenerate with a shady past. The beautiful ballerina with a bright future. They live in different worlds, yet somehow, they fit. But just because they fit doesn't mean they belong together. Cracks sometimes form. Two pieces don't always make a whole. The course of love never did run smoothly. Things get messy. And Reece doesn't do messy. Not anymore.
★︎★︎★︎★︎★︎

Chasing Thunder by Ginger Voight
This is the first book in Ginger's new series, Wyndryder.  This new releases is filled with a dark twisted plot.  I can't wait to check it out!
SYNOPSIS
What is the true name of evil?

The Zodiac Killer, the Hillside Strangler, the Night Stalker, and the Green River Killer all left their mark on California . . . and now the city of angels is under siege.

When fiery, redheaded biker MJ Bennett witnessed her beloved grandfather gunned down on her sixteenth birthday, she made herself two promises. She would continue his quest to save teenagers lost to the dark side of Hollywood—the side tourists never see—and she would never let herself get that close to anyone ever again.

MJ begins to connect the dots between Haley and a dangerous crime lord who hides his savage sex trafficking enterprise behind legitimate businesses. But the clock is ticking, and the Hard Candy Killer is closing in on the target he wants most, MJ, whose family secrets have her marked for destruction, turning the hunter into the hunted.