BENEATH THIS INK by Meghan March ~ Review 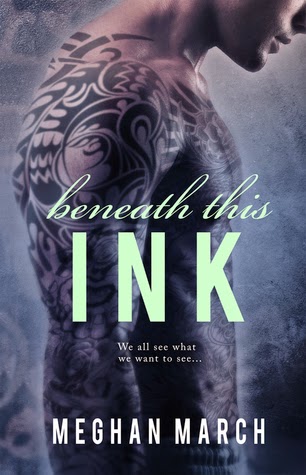 BENEATH THIS INK (Beneath #2)

I’ve always known she was too good for me, but that never stopped me from wanting her.

And then I finally had her for one night.

A night I don’t remember.

I figured I’d blown my shot.

But now she’s walked back into my life, and this time, I have the upper hand. I want my second chance.

Will she be able to see the man beneath this ink?

I have a confession… I judge books by their cover! There I said it! I am terribly guilty of 1-clicking a book just because I LOVE THE COVER! Yes it has landed some duds on my Kindle HOWEVER in this case... right here... I FOUND A WINNER and not just one BUT TWO!!!

I grabbed Meghan March’s, Beneath This Mask last week, I had no idea what I was uncovering. I MEAN I FREAKING LOOOOOVED IT! Seriously!!!  I stayed up ALL NIGHT READING IT. SO OF COURSE after devouring Charlie & Simon's story I JUST HAD TO grab the next book in this amazing story!  I know I am rambling BUT I can’t contain my excitement!!!

Okay on to my review!
Beneath This Ink is the second book in the Beneath Series. It must be said that each book can be read as a standalone HOWEVER I would highly advise you to read and savour each book’s total greatness!!!!


“We were like oil and water. Although that night, to be cliché, we’d been like fire and water.”

This pretty much sums up the electric chemistry between Constantine “Con” Leahy and Vanessa Frost. Their constant push-pull relationship has years of resentment and sexual tension built up to near explosion.

Vanessa was born with into a family steeped in wealth and power. She always had the finer things in life at her fingertips YET all she really wanted was her mother’s love and acceptance. After losing her mother during her formative years, Vanessa formed a tough exterior assuming she was always under constant scrutiny.

Con is the former abused foster child adopted by an elite New Orleans family. At first glance he is the ultimate bad boy, talented tattoo artist and he even owns a strip club that he frequents OFTEN. I loved peeling back the layers of Con and seeing that he was so much more than meets the eye.


Even fifteen years didn’t change the fast that I’d been the kids who showed up in the Garden District, garbage bag in tow, because Joy and Andre Leahy decided that wanted to give being foster parents a shots. Their friends and neighbors had been horrified. And when Joy and Andre had decided to adopt me? You better believe their sanity had been questioned.

Con has spent two years trying to remember their one drunken night. As fate would have it, Vanessa finds herself needing a HUGE favor from Con in order to secure her life-long dream position.


“Sweetheart, if I can’t get you in my bed in three weeks, I don’t deserve to call myself a man. And when I get you there, it won’t have jack shit to do with that deed.”

Meghan does an amazing job luring you into the world she has created. Her characters are captivating with a heavy dose of sarcasm!! I love the banter and the no hold bars attitude that Vannesa does not hesitate to throw out at just the perfect time!

The next book in the Beneath Series is currently up for vote… YEP Ms. March is leaving up to use to decide. How you ask, well after you read Beneath This Ink you must cast your vote in your review telling her just who you want next. MY VOTE IS FIRMLY WITH LUCAS TITAN!!! Seriously this bad ass billionaire taking New Orleans by storm needs to tell his story! Of course I will need Lord’s book because his secrets are so deep I just KNOW HE WILL ROCK MY WORLD!!!