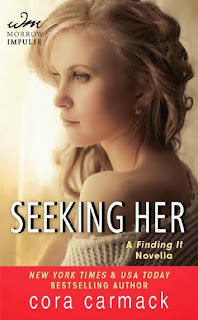 Seeking Her (A Finding It Novella)
Losing It Series #3.5
By: Cora Carmack
Set to Release on January 28th
Goodreads Link

Jackson Hunt gets his turn in this Finding It prequel novella …

Jackson Hunt hasn't been out of the military for long, but he needs to get a job and find a sense of normalcy if he is going to keep his demons at bay. The job that falls into his lap, though, is anything but normal.

Becoming bodyguard (and babysitter) to spoiled rich girl Kelsey Summers isn't exactly what he had in mind, but it's a chance to travel, to get away. The catch: Kelsey's father doesn't want her to know she's being followed.

She's vibrant and infuriating, exciting and reckless, mysterious and familiar. When Jackson sees her falling into the same patterns he suffered years ago, he decides it's time to stop watching and help her instead. But getting to know Kelsey is more difficult than he thought, especially because the more he knows her, the more he wants her.

Pre Order Links for Seeking Her
AMAZON / BARNES AND NOBLE

Exclusive Excerpt of Seeking Her by Cora Carmack by WilliamMorrowBooks 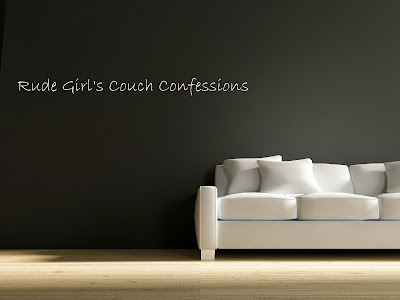 Melanie sat down with Cora as part of our segment Rude Girl's Couch Confessions.

RG: We love your Losing It series. What do you love the most about writing a series?

Cora:  Writing a series like mine is the best of both worlds. I get to start over with each book, delving into a new story and new characters, which means I’m not living with the same characters for years on end. But because they’re secondary characters from earlier books, they’re not entirely unfamiliar, so I’m not completely starting from scratch.

RG:  So many people have loved the characters from this series. Who/What was your initial inspiration for Bliss?

Cora:  Bliss’s personality is sort of a mix of mine and that of a very good friend from college. So, writing Bliss was very nostalgic, and almost felt like I was getting to recapture the fun college years that I enjoyed with that friend. For that reason, Bliss will probably always be the character whose voice comes easiest to me.

RG:  Is your writing space nice and neat or crazy and cluttered?

Cora:  My life is crazy and cluttered. LOL. That’s one thing that Bliss and I don’t share—she’s pretty OCD and neat. Me? Not so much.

RG:  What is the most unique gift you have received from a fan? Please tell me it has something to do with a cat.

Cora:  Oh… that’s a good question. I tend to get lots of sweets and little knick knacks from fans at signings, which is always cool. I got some Estonian Vodka at my last signing… that was pretty awesome. But probably my favorite was a drawing that was sent to me of Cade and Max as a pseudo comic book cover. It read “The Adventures of Golden Boy and Angry Girl” and was pretty darn cute.

RG:  We are so excited for your new project, the Rusk University series. Is there an excerpt or little secret you could share?

Cora:  Hmm… let me see. Here’s a little teaser for you from Carson’s point-of-view on the night he first meets our heroine, Dallas.

“I’m not sleeping with you,” she says.
Surprised, I bark out a laugh and feel the last of the night’s frustration ebb away. She says exactly what she’s thinking, and I love it. I’m shocked by how much I want to keep prodding until I’ve unraveled every little thought that crosses her mind.
“Again with the assumptions,” I say.
“Like you weren’t thinking about it.”

I hadn’t actually gotten that far, but now I’m thinking about it.

RG:  Driving or Flying?
Cora:  Driving, but train travel is my favorite

Cora Carmack is a twenty-something writer who likes to write about twenty-something characters. She's done a multitude of things in her life-- boring jobs (like working retail), Fun jobs (like working in a theatre), stressful jobs (like teaching), and dream jobs (like writing). She enjoys placing her characters in the most awkward situations possible, and then trying to help them get a boyfriend out of it. Awkward people need love, too. Her first book, LOSING IT, is a New York Times and USA Today bestseller. 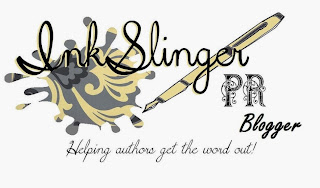