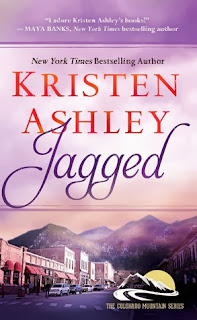 Zara Cinders always knew Ham Reece was the one, but he wasn't interested in settling down. When she found someone who was, Ham walked out of her life. Three years later, Zara's lost her business, her marriage, and she's barely getting by in a tiny apartment on the wrong side of the tracks. As soon as Ham hears about Zara's plight, he's on her doorstep offering her a lifeline. Now, it will take every ounce of will power she possesses to resist all that he offers.

Ham was always a traveling man, never one to settle down in one town, with one woman, for more time than absolutely necessary. But Ham's faced his own demons, and he's learned a lot. About himself, and about the life he knows he's meant to live. So when he hears that Zara's having a rough time, he wants to be the one to help. In fact, he wants to do more than that for Zara. A lot more. But first, he must prove to Zara that he's a changed man.

Jagged is the 5th installment in Kristen Ashley’s Colorado Mountain Man series. We first meet Graham Reece in “For You” book number 1 of the burg series. He is an old flame of the leading lady in that book and finds himself in a bit of unwanted trouble. Though he makes an appearance in “For You” it is not necessary for you to read it before you read Jagged.
Reece is a drifter, a nomad of sorts, he doesn’t stay in any one place too long and he rarely goes to same city twice. Except for of course, the town of Gnaw Bone, Colorado. That’s a town that he visits with some frequency because that’s where Zara lives.
“We had seen a lot. He might not always have been there in person but he was always just a phone call away, even if he was hundreds of miles away.”
Reece and Zara share a history, they’ve known each other for years and have carried on a mostly friends with benefits relationship throughout that time. Though Reece is 11 years her senior, the difference in age between the pair is never really an issue, Zara is mature for her age and she cares for Reece deeply. Too deeply, because the truth of the matter is that for Zara, Reece is the one.
“It was always you.” I found myself whispering, needing to get it out, give it to him so I could let it go.”
Zara is selfless, she watches Reece walk out of her life time and time again and she lets him go, never gives him a hard time about it because she knows what kind of a man he is and she accepts him for who he is, even if it means loving him from afar, and even though Reece cares for her, probably more than he’s ever cared for anyone, he knows deep down that he can’t give her what she wants, and so when Zara decides to cut ties, it hurts him, but he lets her go, in hopes that she’ll be able to make a life for herself.
“He could see it in his head, the image burning deep, that first good-bye, standing by his truck, her in his arms, smiling her sweet smile, her pretty brown eyes sad that he was going but understanding that was him.”
She tries to move on, tries to live a life that looks good on paper, tries to love someone other than Reece, but deep down Zara knows that, living that life is living a lie.
So when Reece returns to Gnaw Bone and the pair reconnects, he finds her life is just a shadow of what it used to be and makes it his mission to help her find her way again.
“Now I’m back in Gnaw Bone, babe, why do you think that is”…
Then Graham Reece finally gave me what I wanted.
“Because you’re here.”
Can Zara open up and tell Reece what she really needs and wants from him? Will Reece stick around long enough to let love into his life? Will the pair of them fight to be together?
“I barely survived walking away from you. I couldn’t handle you walking away from me.”
Pick up Jagged to find out, Kristen Ashley does not disappoint.

THE SERIES IS REVEALING NEW COVERS FOR EACH BOOK
The First two books (as seen below) have the new cover and you can click on the cover to purchase the books.