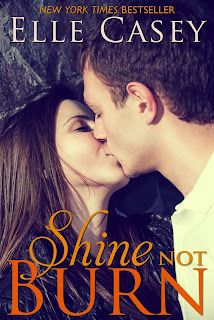 Shine Not Burn
By: Elle Casey
Genre: Contemporary Romance
Hosted by: Love Between the Sheets

IT HAPPENED IN VEGAS.

I can't be held responsible. Things that happen there are supposed to stay there, right? Right? Yeeeah. Not so much.

Andie's just days away from tying the knot, but there's just ooooone little glitch. Apparently, she's already married. Or someone with her name is married to a guy out in Oregon of all places, and the courthouse won't issue her a marriage license until it's all cleared up. Tripping her way through cow pies and country songs to meet up with a man who gets around places on horseback is her very last idea of how to have a good time, but if she's going to get married, make partner at the firm, and have two point five kids before she's thirty-five, she needs to get to the bottom of this snafu and fix it quick ... before her fiance finds out and everything she's been working toward goes up in flames.

I half stumbled, half ran over to fix things. Oh my god, oh my god, what have I done! The former contents of my drink were now dripping off the top of his hat and down his cheek and into his shirt. He’d stood up and was staring down at himself in shock.

“Holy shit, I am so sorry. Oh my god, what did I do?! Oh my god…” I grabbed a bunch of cocktail napkins off the table, nearly spilling other people’s drinks in my haste, using them to dab at his amazing, gorgeous, weather-lined face. He was even better-looking up close, which seconds ago I would have said would be impossible.

When he lifted his gaze to look at me, I nearly had a heart attack. I dropped the napkins with a plop onto his cowboy boots. It would have made Candice proud, the high register that I hit with my girly squeal. “Eeep!” Those eyes! They glowed out from under his hat a sky blue so bright they looked as if they were illuminated from inside his head.

“I’d say the drink is on me, but that would be way too corny and cliché,” he said, his voice almost lazy the way it came out. But I barely heard what he was saying because his glowing blue eyes were piercing my soul or something. I’d never seen anything like them in my life. I could look at him all day long and never get tired of it.

I cringed inwardly as soon as the syllable slid past my lips. The oratory skills that served me so well in the courtroom had abandoned me entirely. I doubted at this point whether I’d be able to string a coherent sentence together. His beauty combined with his slow-talking cowboy sexiness had completely robbed me of any intelligence. The drinks probably weren’t helping.

“Never mind.” He took his hat from his head and shook it a little off to the side, droplets of my former drink flying off to land on the carpet. His hair was longish, the ends curling up at his neck, which really surprised me. I’d been expecting a crew cut or a big bald spot under that hat to spoil the effect, to make him seem more human and not so supernaturally gorgeous … but no such luck. He wasthat beautiful, managing to make every other man in the place look like dog meat. Every single one of them instantly ceased to exist for me, just like the memories of that guy I’d been dating for three years who’d broken up with me by text on my way out here. What was his name again? Puke, I think?

I looked down and noticed a wet spot on the front of the cowboy’s jeans and all down the front of his shirt, and suddenly felt the desperate need to help. I’d caused this problem. I’d ruined his night. And if the stacks of chips in front of him were any clue, he’d been doing pretty well.

I grabbed the pile of cocktail napkins that the dealer had put down at his place and dabbed the whole wad of them first on his shirt and then on the front of his pants.

“I am so sorry. I have no idea what my problem is. Well, that’s not true, I do know what my problem is.” I snorted in disgust. “I’m wearing these ridiculous heels, which I knew were a mistake the first time I saw them, but against my better judgment, I put them on anyway.” I was busy pounding away on his crotch, trying to soak up the alcohol, not really thinking about what I was doing, so wrapped up in my nightmare of a life. “I knew this was a mistake, I knew Vegas was going to be a problem. I don’t know why I let people talk me into things like this all the time.”

He grabbed my wrist and halted my movements. I stopped in mid stream-of-consciousness brain vomit and looked up at him.

“What?” I was totally confused.

He looked down at his crotch, still holding onto my wrist.

I followed his gaze and nearly had another heart attack. There was a distinct bulge going down the leg of his pants that hadn’t been there before.

Andie is a lawyer who has her life all planned out. Junior partner, marriage, two and half kids and then full partner by the time she’s 36. Nothing can stand in her way, not even her best friends and a trip to Vegas. Or so she thought.

Mack doesn’t want to leave the ranch, even for a weekend of fun for his little brother’s bachelor party but his guilt gets the best him. Walking into the casino in Vegas, he doesn’t realize how his life could change forever.

After Andie’s clumsiness catapults her into Mack’s lap, they enjoy a whirlwind night.

“Tonight is not the night for lifeplan action. But a one night stand? Maybe…”

But when Andie wakes up alone, a claim check is the only reminder of what might have happened the night before.

“The nagging feeling that this paper Kelly had found was important wouldn’t go away.”

She returns home to real life, leaving behind the unknown of what might have happened.

Two years pass by and she finds herself engaged to the “perfect” guy – so says her lifeplan. There’s just one problem. The Nevada marriage license records say she’s already married. Leaving behind her life, she heads across the country to take care of this little hiccup before her fiancée finds out.

The rest of the story had me rooting for Andie to take a chance on real life. Mack was the perfect mix of strong, sexy and caring. The supporting characters introduced once Andie gets to the ranch are a wonderful addition to the story. From Mack’s mom to a “wookie,” I was laughing and longing to be right in the middle of it all.

“I do what I gotta do to shine, babe. That’s all I’m doing…shining not burning.”

I enjoyed this book so much. It’s rare that I fall in love with every character, no matter how small their piece in the story. Elle did a great job of using each of them to strengthen and add depth to the main plot. Go get your copy of Shine Not Burn now. You won’t be disappointed! This is a great 4 star read! 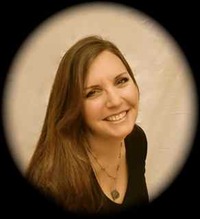 Elle Casey is a full-time writer of New Adult and Young Adult titles in several genres, including romance, urban fantasy, sci-fi dystopian, and action-adventure. She's an American girl who's been living in southern France with her husband and three children since 2010. She loves chatting with her readers, so feel free to drop her a line.