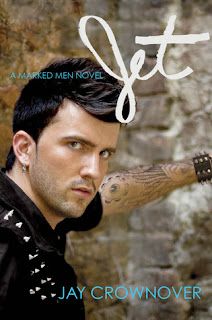 Author: Jay Crownover
Genre: New Adult
Publication Date: May 28, 2013
SYNOPSIS
With his tight leather pants and a sharp edge that makes him dangerous, Jet Keller is every girl’s rock and roll fantasy. But Ayden Cross is done walking on the wild side with bad boys. She doesn’t want to give in to the heat she sees in Jet’s dark, haunted eyes. She’s afraid of getting burned from the sparks of their spontaneous combustion, even as his touch sets her on fire.

Jet can’t resist the Southern Belle with mile-long legs in cowboy boots who defies his every expectation. Yet the closer he feels to Ayden, the less he seems to know her. While he’s tempted to get under her skin and undo her in every way, he knows firsthand what happens to two people with very different ideas about relationships.

Will the blaze burn into an enduring love. . . or will it consume their dreams and turn them to ashes?

MY REVIEW
Jet is the second book in the Marked Men series and once again Jay Crownover deliveries!  Jay creates the most beautiful flawed characters that I LOVE to wrap my hands around!  You will get pulled into their world and sucked right up into their lives.  This is a solid 4 star read!

Jet Keller is the tatted up, perfectly pierced temptation all wrapped up in an emotional package.  Jet is enjoying his life as an up and coming rock star, playing gigs, doing tours and working his ass off in his start up recording studio.

“You’re beautiful, and in the morning when I replay this conversation over and over in my head, I’m going to absolutely want to kick my own ass, but you don’t want to do this.”


"As long as I can continue to write songs that are good enough to bring beautiful, dark-haired girls knocking at my door in the middle of the night, I can be happy. I'll sing you anything you want, Ayd, if it means you keep looking at me the way you're looking at me right now. The long run can take care of itself much later."

We are pulled into Jet’s dark family struggles.  His father (and I use that term only because of their genetic connection) is a total LOOSER!  Dave Keller has abused Jet and his mother for years all the while manipulating Jet to feed his addiction of being a professional roadie.

“He made me furious in a way I couldn’t express with normal words.  The only way I ever got it all out was to purge it on stage in bleeding vocals and ear-shattering melodies.”

Ayden Cross moved to Denver her freshman year of college looking for a fresh start.  In addition to her new life, she now has amazing friends and excels at her studies.  I loved Ayden's cowboy boots, country roots and strong personality BUT you will be waving your fist in the air over the way she treats Jet.  She falls hard for Jet and this plays havoc on the tight hold Ayden has on the life she has built in Denver.

“He didn’t have all the raw edges that Rule has, he wasn’t prone to broody moodiness like Nash, and he wasn’t into making a scene like Rowdy.  He was just laid-back and liked to have a good time”


"Jet was going to undo me in every way he could, and I just didn't know if I was going to be able to stop him.”

And life would not be complete without some advice from Rule and Cora!

"When the right one comes along, Jet, you figure it out. You move mountains, you change your life and you do whatever it takes to keep them with you. I would be half the man I am without Shaw. She makes me better, she makes me happy, and I can see that Ayden does that for you, too." ~ Rule


“None of us is shooing sunshine out of our asses, girl, so I don’t know why you think you should suffer along.” ~ Cora

I fell hard for Rule, check out my review of Rule here so Jet had some big shoes to fill.  Jay Crownover made him his own and he was completely different then Rule, I am certainly a Jet fan.

Jay Crownover is the bestselling author of Rule. Like the characters in her Marked Men series, she is a big fan of tattoos. She loves music and wishes she could be a rock star, but since she has no aptitude for singing or instrument playing, she'll settle for writing stories with interesting characters and that make the reader feel something. She lives in Colorado with her three dogs.