Kyra Davis stopped by RG to talk about her upcoming release, Just One Lie (Just One Night #2) and share a great sneak peak with our followers!!! Once you check out the interview be sure to enter the Just One Lie Paperback Giveaway! 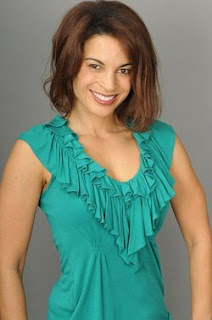 ABOUT KYRA
Kyra Davis is the New York Times and USA Today bestselling author of the Just One Night, Pure Sin and Sophie Katz series as well as So Much For My Happy Ending. Just One NIght has been optioned for television by Anonymous, (the producers of True Detective)

Before publishing her first book, Sex, Murder And A Double Latte in 2005 Kyra supported herself and her son as a marketing manager for a sports club and before that was a department manager at Nordstrom’s Savvy department. She studied at The Fashion Institute Of Design and Merchandising and Golden Gate University.

Kyra now lives with her husband (director and screenwriter, Rod Lurie), her teenage son (proud science-geek and Hawaiian-Shirt-aficionado), dog (champion eater and guardian of the backyard…no squirrel will dare set foot in it) and gecko (the gecko doesn’t do much).

Thank you for stopping by RG!
We are excited to promote your upcoming release, Just One Lie.

RG: Just One Lie is Melody’s story, how is she different from her sister, Kasie?
KD: In almost every way. Honestly, they're so completely different it's much easier to tell you about the only two things they have in common. The first is that they're both shaped by their upbringing (albeit in dramatically different ways). The other is that they're both exhibitionists (once again, in very different ways). Kasie remembers how her parents basically "erased" Melody from their lives, not even allowing Kasie to talk about her sister. They got rid of all the pictures of Melody and anything else that would imply she ever even existed. There was always a clear but unspoken message that if Kasie stepped out of line she could self-destruct and be erased too. For Kasie that fear was motivation enough to always follow the rules, but it also made her attracted to the idea of being seen and admired. So when she meets Mr. Dade and he finds ways of making that possible she finds it incredibly exciting.

Melody (who changes her name to Mercy) of course is the one who was erased so she wants to be seen too and makes a point of it. No one has to make that possible for her. She can figure that part out all on her own. So the women approach their shared desire in very different ways. Everything else, their temperament, their interests and tastes, their education, career ambitions, everything else about these two is different.

RG: Can you share an Excerpt or some sort of sneak peek from Just One Lie?

KD: Sure! Here's a scene between Melody and a man from her past, Ash, who suddenly reenters in her life.

I can feel his breath against my skin. When did he move so close? The world has taken on an appealing fuzzy quality, blurring the stars together into flickering lines of white against a gray-black sky. And it’s under that sky that Ash is here, touching me, silently demanding so much while asking so little. He doesn’t understand what he's done to me, what he can do. Slowly, oh so deliciously slowly, he touches his lips to mine. It’s not aggressive or overtly sexual, but it’s definitely not innocent, either; not as my mouth opens just slightly against his and he reaches around my waist, pulling me an inch closer. This is a kiss that dances on the edges of sweetness and sin. It tastes like a promise.

RG: I love the whole plot in the Just One Night Series. Did the story evolve slowly or did you know the entire direction from the start?
KD: When I started the first book, JUST ONE NIGHT, I knew I wanted it to be a story where sex and sexuality would work as the engine for a woman's journey to self-discovery. Once Kasie has an uncharacteristically wild night in Vegas filled with adventure, seduction and mind-blowing sex with a stranger, she's forced to take a good, hard look at herself. She's pushed to think about what she's settled for in her life, what she actually wants and who she really is under the facade she shows the world.

I also knew that I wanted Mercy to be the opposite of her sister. Sex and sexuality is the one thing that Mercy has no problem with. And she's not one for rules. Yet, like her sister, she is lost. Her challenge is not with the physical but with the emotional end of things. Mercy's a lead singer in an indie rock band so she would begrudgingly approve of my quoting Johnny Lee and suggest that she's "lookin' for love in all the wrong places." Once she figures that out she too begins to reexamine her life. So there is a common theme to the stories, I'm just approaching that theme from completely different angles.

RG: If you weren't a writer, what professional career would you have or want to be in? And why?
KD: That's a really good question. Part of me wants to say I'd be in the fashion industry since I went to college at F.I.T. (Fashion Institute of Technology) and used to be a department head for Nordstrom's Savvy department. But there were some family and parenting issues that demanded my time and a flexibility of schedule. The fashion industry really couldn't accommodate that. It was incredibly scary for a while because I couldn't figure out how to make it all work. It was only when I decided to escape inside a story I made up for myself that the solution presented itself. I was able to turn that story into a book and get my first publishing contract. From that point on, making up stories became my career. So writing basically saved my family. I don't know what I would have done if I didn't discover I had a passion for it.

RG: If you could have dinner with any fictional character, who would you pick?
KD: The Vampire Lestat. If my husband was okay with it, I think I'd let him bite me...if only just a little.
☺
RG: If you had hidden cameras in your house, what super embarrassing things would be seen?
KD: My complete lack of organization. Seriously, I'm a mess.

RG: If you were being taken to a stranded island and could only take one book, which would you pick and why?
KD: Just one book?! Are you trying to kill me?? Okay, fine...I guess MAYBE The Vampire Lestat. It's a long book and it's so involved with so many hidden details. I could read it over and over again and still find something new. Although I could say the same about any one of Elizabeth George's mysteries.

RG: What is your guilty pleasure where books are not concerned?
KD: It's a toss up between cocktails and chocolate. I see absolutely no reason why I should ever settle for just one or the other! 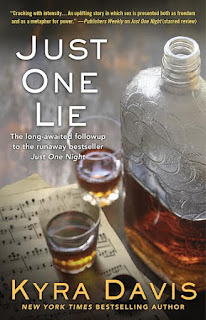 JUST ONE LIE (Just One Night #2)
By Kyra Davis
Release Date: July 28th
AMAZON
GOODREADS
SYNOPSIS
The long-awaited follow-up novel to the runaway New York Timesbestseller Just One Night—which Publishers Weekly gave a starred review and proclaimed, “Davis skillfully creates an uplifting story in which sex is presented both as freedom and as a metaphor for power, and where raw chemistry is the clear winner over bland complacency.”

In the instant international sensation Just One Night, sensible Kasie Fitzgerald unleashed her passions—and found herself—through an explosive affair. In Just One Lie, we meet Kasie’s wild and tortured sister, whose impulsivity and lack of self-control has set off a chain of events that changes her family forever.

Melody Fitzgerald is the opposite of the “perfect” daughter. The lead singer of an indie rock band, she is impulsive and creative, with a rebellious streak that both defines her and becomes her greatest enemy. Her lover, the enticing and unpredictable Ash, shares her free spirit and penchant for trouble. On the face of it, he seems to be her perfect match.

So why is she so drawn to her soft spoken, reliable drummer, Brad Witmer? How can a man who wears polo shirts and reads the financial section of the paper be of any interest to her at all? And why on earth does someone like that appear to be so captivated by her?

Before she knows it, Melody finds herself on a path of self-discovery, passion, and affairs of the heart. But will a dark secret from her past derail it all? Or will its exposure be the very thing that unburdens her heart and allows her to seek a future with the one man who loves her completely?

♥︎♥︎GIVEAWAY♥︎♥︎
One lucky winner will win an unsigned copy of JUST ONE LIE!
US/Canada Residents only and must be 18 years old or older to enter
(restrictions set by publishers)
a Rafflecopter giveaway