Kim Karr stopped by RG to talk about her upcoming release, Toxic  and a great sneak peak for you!!!  Once you check out the interview be sure to enter the Toxic Paperback Giveaway! 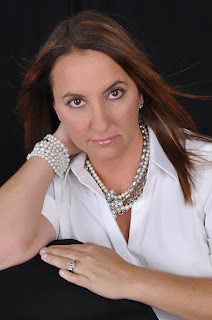 I live in Florida with my husband and four kids. I've always had a love for reading books and writing. Being an English major in college, I wanted to teach at the college level but that was not to be. I went on to receive an MBA and became a project manager until quitting to raise my family. I currently work part-time with my husband and full-time embracing one of my biggest passions—writing.

I wear a lot of hats! Writer, book-lover, wife, soccer-mom, taxi driver, and the all around go-to person of the family. However, I always find time to read. One of my favorite family outings use to be taking my kids to the bookstore or the library. Today, my oldest child is in college and my twins are on their way, so they no longer go with me on these outings. And although I don't need to go to the actual store anymore because I have the greatest device ever invented—a Kindle, I still do. There's nothing like a paperback. So now my four year old and I make dates out of going to the bookstore--it's time I love and cherish.

I like to believe in soulmates, kindred spirits, true friends, and Happily-Ever-Afters. I love to drink champagne, listen to music, and hopes to always stay young at heart.

RG: I see Toxic is a standalone read about an hotel heiress meeting the bad boy of the popular nightclub world. Can you tell us a little behind your inspiration for this story?
KK: I’d read an article about underground nightclubs and thought it was such a cool idea. People show up in the oddest of places to party and then move to another. That transformed into Jeremy’s business in a more legit way. As for Phoebe and friends, I wanted to create a group that was somewhat against the grain of how we think of socialites.

RG: Can you give us a sneak peek into TOXIC?
KK: One of my favorite scenes.
My vision began to blur at that point and I knew I had had way too much to drink.
Lars’ mouth was at my ear before I could move away. “Your outfit makes it look like you have curves in all the right places though, don’t worry.”
I thought I might vomit.
Was he for real?
Words flew out of my mouth at lightning speed. “You’re such a dick. Go find some other woman to harass who’s into your kind of foreplay.”
An evil grin formed on his lips. “A dirty mouth too, just the way I like them.”
“You like them anyway you can get them,” I spat back.
Bile rose in my throat and I wasn’t sure if it was his attention or the alcohol causing the sick feeling.
“Feisty,” he grinned. “What was Dawson thinking letting you go? I bet you’re an animal in the sack.”
“Get lost,” I told him and turned to walk away.
He grabbed my wrist. “Now that you’re all worked up, what do you say we get out of here? I won’t tell Dawson.”
I tried to free myself of his grip but he wouldn’t let go.
Someone stepped between us. The distressed leather was the first thing my eyes were focused on when my skin started to tingle with a sense of familiarity. The tingling quickly turned into trembling as my gaze lifted and I saw the bluest of blue eyes.
They were soft, concerned, knowing.
They were the eyes of my past.
It was him.
I was surprised.
I was shocked.
I was mesmerized.
My body started to tremble even more and I downed the glass of wine I had been holding to help calm my nerves.
Still, I couldn’t stop staring. He looked the same. No, he looked better, if that was possible. His hair was shorter but his devastating good looks were even more striking.
This time I knew he was real—he wasn’t a figment of my imagination. Just that one look into his eyes and all the hurt was forgotten. It was as if the last five years had never happened. And we’d just met.
RG: Let’s circle back to your bestselling Connections Series. What inspired you to create a world linking couples from such different walks of life?
KK: The Connections series was always meant to be centered on the Wilde family. River, Xander, and Bell. I love family dynamics and wanted to incorporate them into the series. The link between Dahlia, Ben, and Bell was what drove my first book and because I love Ben, I wanted to share his story.

RG: If you weren't a writer, what professional career would you have or want to be in? And why?
KK: Photography seems like an amazing profession. I love looking at beautiful pictures and wouldn’t mind being able to take them. Working for a magazine and taking pictures seems ideal!!! I see a character in my future.

RG: If you could have dinner with any fictional character, who would you pick?
KK: That’s easy. Hands down—Kellan Kyle. I just love him, there’s nothing else to say about it.

RG: If you had hidden cameras in your house, what super embarrassing things would be seen?
KK: Oh, wow. Let’s see. Laundry all over my familyroom because I hate folding and it takes me days to get it done. My desk area because it is a mess. Water bottles, papers, stickies with thoughts, clip boards—lots of junk.

RG: If you were being taken to a stranded island and could only take one book, which would you pick and why?
KK: Outlander by Diana Gabaldon. It is one of my all-time favorites. Think I’m still in love a little with Jamie after all this time. Definitely a must read!
RG: What is your guilty pleasure where books are not concerned?
KK: On line shopping. Shhh….

RG: Last but certainly not least, can you tell us a little about your current Work In Progress?
KK: I have already written my next two books, which I haven’t announced titles yet. Both center on a secondary character from Toxic but the story is in no way like Toxic. It takes place in Boston and is different from anything I have ever written. 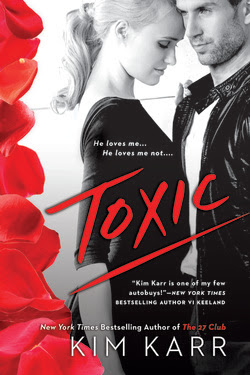 TOXIC
by KIM KARR
Releasing July 7th
AMAZON
GOODREADS
SYNOPSIS
He Loves Me, He Loves Me Not...

New York Times bestselling author Kim Karr turns up the heat in a smoking hot, emotionally compelling new novel that takes you into the world of Manhattan’s elite.

In Toxic, Jeremy McQueen, a sexy, intense, sometimes brooding entrepreneur goes after what he wants—the woman he left behind years ago. Phoebe St. Claire, a put together, in control socialite-turned-CEO has been drifting through life searching for something she thought she'd never find again—the right man to share her future.

Our passion was boundless. Our lust untamed. And our desire endless. He was the only man who ever made me feel alive. Then, I betrayed him.

When he reappeared, I didn’t question it. Trust rarely survives the wrecking ball, so when he let me in back in—I didn’t hesitate.

Maybe I should have.

What began as a bid to save my family business, turned into a second chance at love. It felt so romantic. Working together, side by side, with the man I loved. My dream come true.

Nothing is as good as it seems.

We had our issues, but then again, every couple does. It wasn’t jealousy, or our too-hot sex life that I should have been worried about.

It was his darkside.

I never saw the end coming, until it slammed me in the face. The question is—did he?

Was revenge his plan all along?

****
Sometimes you have to wonder if your life is too good to be true.
Is it real or just an illusion?
Does the man lying beside you really love you like he says he does?
If the answer is yes, you’re meant to live happily ever after.
If the answer is no, you’re living my life, and nothing will ever be the same.

What you do about it—that’s up to you.

Me, I’m in too deep and there’s no getting out.

♥︎♥︎GIVEAWAY♥︎♥︎
One lucky winner will win an unsigned copy of TOXIC!
US/Canada Residents only and must be 18 years old or older to enter
(restrictions set by publishers)
a Rafflecopter giveaway