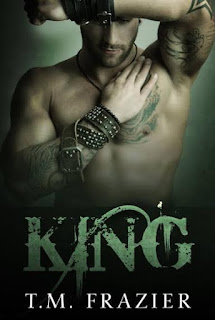 Homeless, hungry and desperate enough to steal, Doe has no memories of who she is or where she comes from.

A notorious career criminal just released from prison, King is someone you don’t want to cross unless you’re prepared to pay him back in blood, sweat, pu$y or a combination of all three.

King’s future hangs in the balance. Doe’s is written in her past. When they come crashing together, they will have to learn that sometimes in order to hold on, you have to first let go.

Warning: This book contains graphic violence, consensual and nonconsensual sex, drug use, abuse, and other taboo subjects and adult subject matter. Although originally slated to be a standalone, KING is now a two part series.

When I was done, I handed her the hand mirror, and she walked over to the full-sized mirror that hung on the back of the door, like she'd seen dozens of my other clients do before. When she held up the hand mirror, she gasped.

I was just an asshole.

But I couldn't help myself. My name needed to be on her. It wasn’t enough just to call her mine. I needed to mark her as well. So hidden in the vine work under the quote I found that I thought was perfect for her, was my name.

KING was woven into the design. In order to see it you had to tilt your head or otherwise you wouldn't notice it. But it was there.

I would tell her eventually of course, but I wanted it to be my secret for a while. She'd stopped being my possession a while ago, a lot longer before I cared to admit, but I still felt the need to mark her as mine.

I still liked the idea of owning her.

Only now, she owned me, too.

She didn't notice the name. Tears filled her eyes. She stood there staring at the hand mirror in just her panties. Little cheeky ones where her ass hung out of the bottoms. Her tits were only inches from my face. Her tears of happiness made my dick twitch. Although her sad tears evoked the same response.

My dick wasn't partial to which kind of tears he liked.

I took the mirror from her hand and lifted her up onto the counter. "You like it?" I asked, pushing her panties down her legs.

"I love it," she panted, wrapping her legs around me, drawing me close. Her wetness soaking my boxers. I pushed them down with one hand. I'd been hard for three hours, the entire time I’d been working on her, and couldn't wait any longer. I pushed inside her tight, wet heat.

"You love it?" I asked, needing to hear her say it again.

I froze when I heard the words, and when I did, her eyes flung open.

"Oh my god, I have that word vomit thing. I’m sorry. Shit, I just meant that—"

"Shut the fuck up!" I demanded, thrusting hard to get her attention. She closed her eyes, and her head fell back. "That's fucking better. Now, keep that pretty mouth of yours shut while I fuck you."

"Shut up," I said again, and she closed her mouth. "Shut up so I can fuck you…and show you how much I love you."

She nodded and although her eyes stayed shut, a tear rolled down her cheek. I sucked it off her chin before it could fall to the floor.

Then, I fucked her.

I showed her how much I loved her until I couldn't tell where I started and she began. Until all that was in that room was me and her and the thing between us that kept pulling us together like magnets. Until we were lost in sensations and orgasms.

And in each other.

I fucked her until we were one person, and in a way we were, because I'd lost myself along the way and I found myself again in the most unlikely place.

I'd found myself again in the haunted eyes of a girl who was just as lost as I was.

Or maybe, we didn't find each other at all.

Maybe, we just decided to be lost together.

She attended Florida Gulf Coast University where she specialized in public speaking. After years working in real estate and new home construction, she decided it was finally time to stop pushing her dreams to the back burner and pursue writing seriously.

In the third grade she wrote her very first story about a lost hamster. It earned rave reviews from both her teacher and her parents.

It only took her twenty years to start the next one.

It will not be about hamsters.