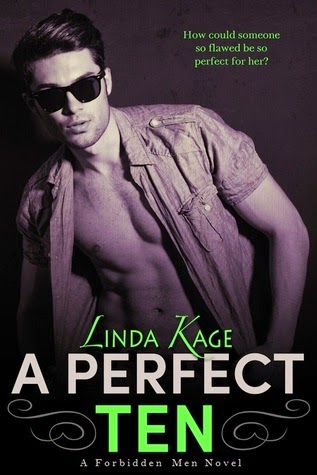 I know I've closed myself off in a major way over the past year, ever since “the incident” where I messed up my life completely. It's past time I try to live again or just give up altogether. But this is quite possibly the craziest thing I've ever done. In a last ditch effort to invigorate myself, I'm standing outside Oren Tenning's bedroom, I just peeled off the sexiest pair of underwear I own, and my hand is already raised to knock. My brother would disown me for doing anything with his best friend, and he'd probably kill Oren. But if I play my cards right, no one will ever know about this. Not even Ten.

Maybe after tonight, I’ll finally get over this stupid, irrational crush I hate having on the biggest jerk I’ve ever met. Or maybe I’ll just end up falling for him even harder. Maybe I’ll discover there’s so much more to my crude, carefree hunk than meets the eye.

So this is my Pathetic Loser's confession: I am Oren Tenning, and I have fallen. Hard.

Linda Kage continues her Forbidden men series with A Perfect Ten. This story is told in the alternating povs of Oren “Ten” Tenning and Caroline Gamble. I loved this couple’s banter, high sex drives and a forbidden infatuation.

Ten has been hiding a tragic past behind his good looks, dirty mouth and man-whoring lifestyle. During his freshman year of college he discovered three things (1) this would be his new beginning, leaving all the pain from his hometown behind; (2) Noel Gamble was the perfect roommate; and (3) he had a budding college football career. As the years progressed so did Ten’s friendship with Noel, his football career and he achieved legendary status with the ladies.

Caroline is amazing!! She is absolutely perfect for Ten! She is funny, smart-mouthed and fearless...BUT (yes you could see the but coming) She was Noel Gamble’s little sister. THEREFORE, she was totally off limits. Caroline’s first attempt at love left her broken whereby sending Noel into the VERY over-protective big brother role, especially when it came to warning off his best friend.


Gamble was my best friend and Caroline was my heart and soul. But I didn’t see how I could keep both.

Caroline has been lusting after Ten for MONTHS. At times she believes the feeling is mutual BUT Ten is determined to honor Noel’s wishes. This couple’s constant push-pull chemistry was an underlying story in With Every Heartbeat and had me almost aching to get my hands on this book!!!


My stupid, idiotic heart that had no sense of decency or self-preservation whatsoever. Seriously, what kind of heart fell for an annoying, obnoxious, loud-mouthed male-slut?

I don’t want to give too much away here SO let’s just say that Caroline couldn’t wait for Ten any longer so she takes matters into her own hands!!! Let’s just say it took just a little conniving and a hidden identity.


Caroline Gamble was not my secret.  She was my heart and soul, and I just couldn’t do this shit much longer.


This story is a delicious mix of sweet and sexy! Before starting this book I thought I already knew all there was to know about these characters and although it does have an element of predictability, I was surprised by the direction that Linda Kage took this story in. I believe it is a great addition to this series. I'm already feeling impatient for book six in the series.
Rating: 4 stars (Standalone; Alt POV)