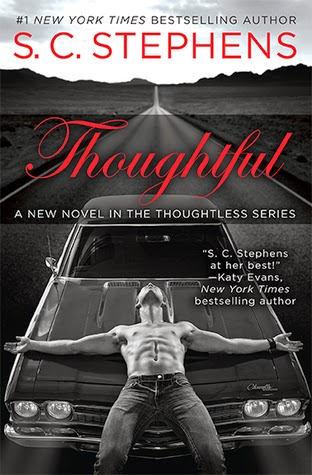 In Thoughtless, Kiera told her story. Now it's time to hear from the sexy rock star who captivated us all . . .

The only place Kellan Kyle has ever felt at home is onstage. Gripping his guitar in a darkened bar, he can forget his painful past. These days his life revolves around three things: music, his bandmates, and hot hookups. Until one woman changes everything . . .

Kiera is the kind of girl Kellan has no business wanting-smart, sweet, and dating his best friend. Certain he could never be worthy of her love, he hides his growing attraction . . . until Kiera's own tormented heart hints that his feelings might not be one-sided. Now, no matter the consequences, Kellan is sure of one thing-he won't let Kiera go without a fight.


Just a little Q & A before we get to RG's review of Thoughtful.

~ Why do you think fans are so passionate about the series?
SCS:  Kellan. I think it all stems from him.

~ What’s your favorite quote or scene from THOUGHTFUL?
SCS:  Whether it’s from his point of view or hers, the rain scene is still my favorite.

~ If Kellan and Kiera’s relationship had a theme song, what would it be?
SCS:  There are so many good ones, but I always find myself going back to I Can’t Not Love You by Every Avenue.
~ Tell us about the cover process. Is this what you had in mind?
SCS:  Yes! I had several ideas that I thought would work well for the book, but I really wanted something with the car. I was so excited that Forever was able to find a Chevelle and make that happen!
~ If THOUGHTFUL was being made into a movie, who would you include in your dream cast?
SCS:  I’ve grown to love Devin Paisley as Kellan. He definitely has the right look. I’m not sure about the others, except Denny. He’s always been Craig Horner to me.

THOUGHTFUL is the highly anticipated addition to the Thoughtless Series, is told solely from Kellan’s POV. It pretty much follows the timeline throughout Thoughtless with some additions from Kellan’s sad childhood.

First I really need to say that I don’t think there has been or ever will be another rocker that owns my heart like Kellan Kyle. I still remember all the things I felt while reading Thoughtless. Whether you love or hate it, you have to give credit to an author that can create a story that completely owns you.

We all had our hearts ripped out in Thoughtless and really who didn’t want to punch Keira for constantly flip flopping. I will say that after reading Thoughtful I did feel a bit more like MAYBE Kellan was somewhat at fault since HE COMPLETELY HID HOW FAST AND DEEPLY HE FELL FOR HER!

In my very humble opinion I would have rather had a few chapters in Thoughtless from KK's POV than a whole book re-telling the same story.  I would only recommend this book if it doesn’t matter to you that the plot is the same – you just want more Kellan, any way you can get it.

The writing is a solid 4 stars but for me the book is a bit to much of the "I love her but can't have her" and felt a bit flat ~ probably like 3 star read for me SO I am bouncing in the middle with a 3.5 stars for an overall rating.

S. C. Stephens is a #1 bestselling author who spends her every free moment creating stories that are packed with emotion and heavy on romance. In addition to writing, she enjoys spending lazy afternoons in the sun reading, listening to music, watching movies, and spending time with her friends and family. She and her two children reside in the Pacific Northwest.