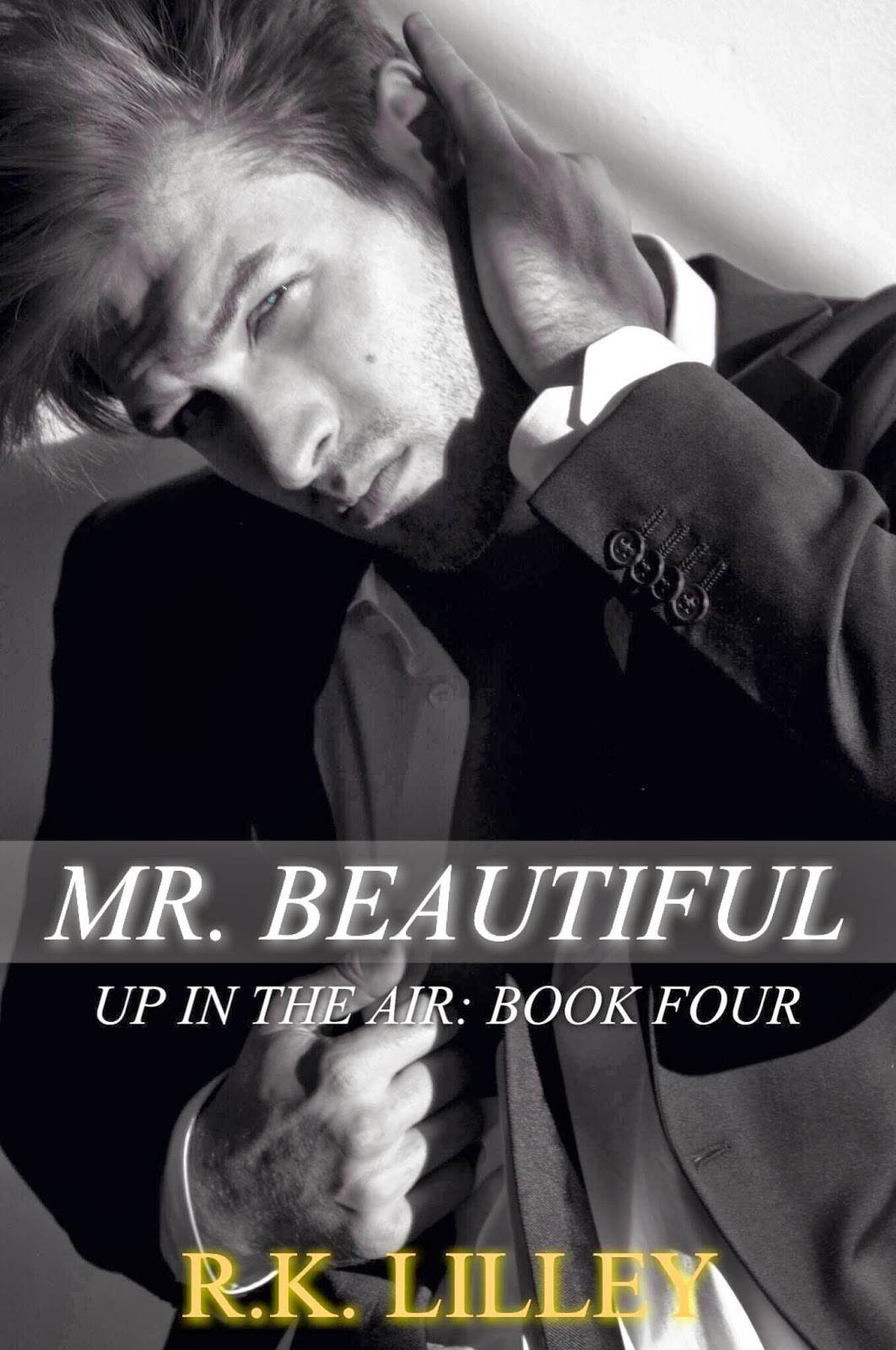 Mr. Beautiful (Up in the Air #4)
by R.K. Lilley
Add to Goodreads
Releasing in 2014 however no release date (or month) currently assigned.


Mr. Beautiful will be a male point-of-view novel for the Up in the Air series that tells the story of James, and Stephan, and their unwavering love of a woman that would make the two men family.

The bulk of the novel will take place after the events in Grounded. However, there will also be many, many bonus male POV scenes from the first three books.

WARNING: THIS TEASER CONTAINS SPOILERS FOR THE UP IN THE AIR SERIES

I couldn’t sleep after the shooting.

But not me. I was more restless than ever. A miracle had saved her, not me, and I felt helpless because of it. That was not a feeling that fit me well. In fact, it made my skin crawl in discomfort. In anger.

It had been months since the attack. She and Stephan were healed physically, and it seemed, emotionally, but I felt the wounds as though they were fresh. What had almost happened haunted me. I was a man that needed control, and I’d been shown, in the starkest way possible, that I hadnone.

I sat scant feet away from our bed, watching Bianca sleep. She was nude, with not so much as a sheet covering her. I’d seen to that. I watched her lithe form shift on the bed, one long leg hitching up to give me a glimpse of the pink between her legs.

I felt like a fucking stalker. Truth be told, I was one, watching her for hours on end, night after night.

I tensed when I realized she’d roused. It upset her that I couldn’t sleep, when she deserved peace more than anyone.

She sat up, and I watched her heavy breasts swaying with the movement. “James.” Her voice was the softest utterance.

“Love,” I answered, feeling the dark mood that had overtaken me lift in an instant. Just having her eyes on me could do that.

She crawled across the bed toward me. She’d always had an uncanny ability to do exactly the thing that would drive me the most wild, and she’d only gotten better at that over time. She didn’t hide her body from me as she moved. In fact, she posed for me, even the exposure of her body an act of submission. As though reading my thoughts, as though even those were a command, she paused on the edge of the bed, parting her legs to let me look my fill before she rose, approaching my chair.

I stood to meet her, my body drawn tight, my cock throbbing as though I hadn’t come, buried inside of her, just hours before.

I was a statue as she leaned up to my ear, my brows drawing together in a question. Her lips touched my ear as she spoke.

“Hurt me,” she whispered raggedly.

My eyes shut tight, my jaw went slack, and a shudder wracked my entire body. This woman destroyed my self-control.

I’d avoided all of the rough stuff since she’d been injured, but God had I missed it.

She gripped my hair, pulling my face down to her injured cheek. She dug her jaw into me so hard that I knew it must be hurting her badly.

“I need it,” she rasped into my ear. “I’ll never stop needing it. Please.”

I pulled back, and my hands trembled as I cupped her face in my hands, my eyes searching hers desperately for what I wanted to see. Need. Yes. She needed this as much as I did. Perhaps more so.

“Get on the bed,” I told her thickly.

OTHER BOOKS IN THE SERIES

LANA (Novella)
Buy from Amazon
Buy from Barnes and Noble