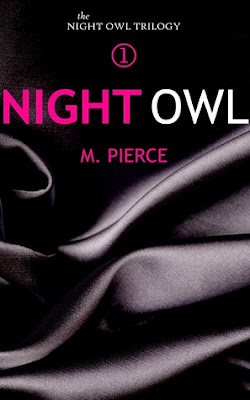 At twenty-seven, Hannah Catalano has a train wreck. Her boyfriend is a deadbeat and her job is abysmal.

Until Matt sees a picture of Hannah.

Hannah's picture sparks an attraction Matt is powerless to ignore. When circumstance brings Matt and Hannah together, the strangers begin a love story that's passionate, poignant, unforgettable, and unstoppable.

Night Owl is the debut novel for author M. Pierce. It is brilliantly written and it will have you on the edge of your seat as the story unfolds. I LOVED LOVED everything about this book!

My days are typically filled with the elusive take charge alpha males so you can’t imagine my surprise when I met Matthew “Matt” Robert Sky, Jr. Matt is reclusive and paranoid when it comes to his approach to mainstream society. However, Matt is confident and controlling to those closest to him. The blend of his personality had me aching one minute and drooling the next!

“There is no such thing as loneliness. There is only the idea of loneliness.”

We meet Matt as he is beginning an online writing relationship Hannah Catalano. Matt sets the guidelines of this relationship to be strictly online writing exchanges ONLY! The writing is flowing effortlessly and their “relationship” seems firmly in place until one fateful night. Rules are broken and walls slowly come down.

Half awake, halfway in the land of dreams, I imagined Matt was a tiger in a man’s skin. He must have been extraordinary, though I knew so little about him.


Matt becomes infatuated with Hannah, the idea of her. They cross boundaries together, break down walls that Matt had wanted to keep in place and when they finally meet the connection between the two is undeniable.


Why did I think I had any power over Hannah? I was hers.

But Matt has secrets, the things about him that not many people know, things about his life that he kept from Hannah and the closer they got, the harder it became for him to keep her in the dark because he knew that keeping her there could ultimately lead to losing her.


Why did every small separation still seem to echo a future goodbye?

As you know, I am a sucker for the male’s POV and in Night Owl we get both! M. Pierce does an amazing job blending both POV’s and keeping the intrigue of the story firmly intact. There is an underlying moral issue throughout the first half of the book that many of you may have already heard about. Yes I struggled to embrace it BUT it does not take away from the story.

This is the first book in the Night Owl trilogy. I will tell you that the story ends great (no cliffhanger) BUT then you flip to the Epilogue and you will be left wondering “WHAT! where did that come from!!!” Don’t fret it isn’t a painful Epilogue and the second book, Last Light is set to release in January. 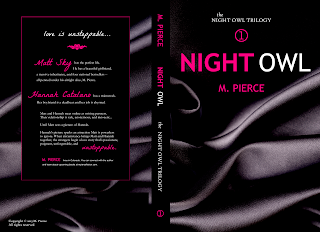