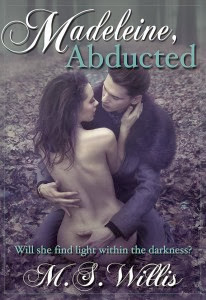 
She was meant to be his destruction…
A pawn played in a perilous game between
father and son…
Yet, her strength was more than either
man could imagine.
As Maddy learns to save herself…
She becomes the one thing that could
set the son free.

Madeleine Clark was raised to become a concert cellist. Sheltered and naïve, she remains hidden behind her music, a protection from the world around her. On the night of her first solo performance, Maddy accepts the admiration of a stranger and finds herself captive in a cruel and twisted power struggle between a sadistic father and his son, Aaron.

Seemingly, dangerous and uncaring, Aaron manages the business operations of his father’s estate. Wanting nothing to do with the slaves kept at the Estate, Aaron refuses to take part in the deeper depravities of his father. Despite his resistance, Aaron’s father ‘gifts’ him with a petite, brunette woman he can’t refuse.

A bond forged in conspiracy and deceit, Aaron struggles to save Maddy by teaching her to survive in the world in which he’d been raised. An unlikely union, Aaron soon learns that great strengths can exist within small packages, while Madeleine learns that love and light can exist in the darkest of places.


EXCERPT
Finding her voice, Maddy spoke out of turn, not thinking about the repercussions her words could elicit. “I would prefer you call me by my name.” She peaked up at him through her lashes. “Maddy, I would prefer that you call me Maddy.”

Aaron stopped with his bare back turned to her, taking several minutes to finally respond, he asked, “What makes you think you are allowed to ask that? If I wanted, I could call you slave…” He turned to face her, the contours of chest perfectly shadowed, his strength unquestionable. “…or whore.” His swagger was slow as he approached her, a hunter skilled in pursuit. “Would you prefer those names to ‘Mouse’?”

Sucking her bottom lip between her teeth, Maddy fidgeted with her hands, refusing to look Aaron in the eyes. She could feel his gaze touching her skin, his perusal of the woman barely half his size. The heat of his body rolled off of him as he circled her. It was the feeling of a soft blanket and lustful threat wrapped around her at the same time. When the deep resonation of his voice occurred again, she cringed, fearing he would strike out at her for the incorrect answer. “Why do you dislike the name I have given you?”

Continuing to fidget, Maddy trained her eyes on her feet, not daring to look up into the endless green she knew stared down at her. Gripping her under her chin, Aaron pulled her face up to look at him, his eyes searching hers for the answer to his question. “You will speak when I tell you.” Dropping his hand from her face, he took a step back placing distance between them. “Now answer me.”

Her heart pounded against the walls of her chest, her throat constricted, making it difficult for her to breath. Fear consumed her as she stood in the shadow of the man who’d taken at least two lives that day. Barely a whisper, her voice squeaked out the answer to his question. “Because a mouse is a furry little rodent, something detested.”

Aaron stood thoughtful and silent above her. When he didn’t respond, Maddy quietly added, “I guess it’s better than Xander’s name for me.”

Laughter bellowed out, causing the toned muscles of Aaron’s broad chest to flex and relax before her eyes. The sound of his amusement so real, it caused her to want to smile in response to seeing a piece of his mask falling away, revealing parts of him not witnessed by many people. Containing himself, Aaron’s eyes sparkled as he asked, “And what, exactly, is Xander’s name for you?”

A scowl creased the fine skin between her eyes, her mouth pulled into the pout of a sulking child. “He calls me ‘cricket’…an insect. It’s odd that you both refer to me as nothing more than a common household pest.”

Aaron’s smile faltered as he looked down upon the beautiful girl who didn’t fully understand her role. “No, Madeleine, you are not a common household pest…”

Maddy looked up at him, anticipating what he would say next.

For a fleeting second, he looked genuinely amused, but his expression was quickly replaced with indifference and contempt as he stated, “you are lower than even a pest in your role as a slave.”

STEPH'S REVIEW
As promised in the Prologue, Madeleine, Abducted “is not meant for the faint of heart.” M.S. Willis weaves us through a very dark love story centered around a world of crime.

John Carmichael has ruled The Estate for decades. So long that his loyal servants are beginning to see the world of crime has twisted the mind of their feared ruler. Mr. Carmichael is truly vile man with literally no regard for morals or human beings.

Aaron Carmichael is John’s son and the one assumed to take over once his father’s time has come to an end. By all accounts Aaron is a monster as well. He is dark, twisted and filled with anger.

Aaron was not a good man. He's cheated in business, he'd killed when it was required, but, never had he acted against an innocent person; and never had he taken a woman against her will.

Madeleine "Maddy" Clark is a cellist. She composes wonderful masterpieces with sorrowful undertone. At first glance we see a meek and timid Maddy, a person that appears to be a borderline recluse. She is terribly shy and pushed to near panic attacks when it comes to performing in front of large crowds.

Upon her capture, we see Maddy slowly transform or more likely come into the person she has always been within. Yes she is terrified and treated horrific but Maddy learns to wield her submission with the power it truly holds.

"This is your fate, Cricket. Asking why isn't going to do anything for you except make that fate a much more painful journey. You need to learn the rules of your position and learn them quickly if you want to make a smoother transition into your new role."

Maddy quickly sees a side to Aaron no one else is allowed to see. In the privacy of his own quarters he shows her lienacy. They form a bond beyond a master/slave relationship and one that Aaron tries his hardest to hold at bay. Because if Aaron’s father found a weakness he would use it against them in the harshest of ways.

“He seeks to control you, Aaron; to tame you by forcing you into corruption. It is the same game you've played with I'm since the beginning."

This book takes you on a very dark journey through crime, slavery and disturbing events. M.S. Willis is a very talented writer bringing life to almost every scene. I enjoyed the love story that transformed and appreciated the outstanding writing.  If you are looking for a dark, gritty read this is your book!
This is a 4 star read. 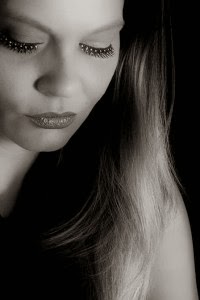 M.S. Willis is a romance novelist whose debut novel, Control, was released in 2013. Although currently writing in the romance genre, Willis has plans to expand her literary pursuits into multiple genres and has no fear conquering difficult subject matters in her writing. Willis is a native Floridian who is also a photographer and musician. When not absorbing herself in written, visual or musical expression, Willis is an adrenaline junkie, a ‘closet’ video game enthusiast, and an avid outdoors person and nature lover.