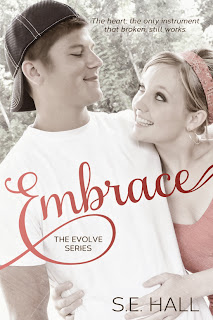 After what he expected to be the romantic gesture of the century, Evan is looking at no friends, a year of ineligibility on the football team, and no girl.

He's starting over alone and doesn't know quite how to proceed. Certain members of The Crew refuse to let him face things by himself, taking him under their wing, and it doesn't take the ladies long to notice him, either.

Sometimes life doesn't go as you had planned. Sometimes it goes better.

Embrace, the second book in the Evolve Series by S.E. Hall, follows the characters from her debut New Adult romance, Emerge.

Lunch is even more fun- oh, not here, but somewhere, I’m sure. I sit down with Zach and Sawyer, my stomach so in knots I’m not sure I can eat, so I peacefully concede my whole plate over to Sawyer when he’s eaten at least half of my fries rather than slap away his hand like I usually do.

Zach’s mesmerized by his phone, shocker, so I kick him under the table. “Ow,” he leans down and rubs his leg. “What the hell was that for?”

“I don’t know,” I shrug, “tell me something interesting.”

“Avery says hey,” he says, staring at his phone again.

Sawyer stops inhaling his, make that my food, just long enough to interrupt. “Avery huh? Kirby get on your nerves too?”

Okay, this is a conversation that may actually keep me entertained.

“Kirby’s cool, she doesn’t get on my nerves, but I’m definitely more into Avery,” he smiles shyly.

Yes! I lost $20 on Sawyer, but just won the same with Zach’s confirmation, so I break even!

“Well no wonder Kirby’s gone if you’re getting into Avery more.”


“Sawyer!” I smack the back of his head. “Say nothing Zach, I mean it.” This convo is going seriously downhill fast but actually gets worse when Sawyer speaks again.

“Sig party tomorrow night man, you in? We’re heading over when I get off, bout eleven.”

“Me and Evan,” Sawyer darts one eye at me, shifting a bit in his seat.

“Nah man, ya’ll go. I’m gonna hang with Avery. What are you gonna do Laney?”

“Um, not go to a party with Sawyer and Evan,” I laugh, half-heartedly. “I’ll be doing whatever Dane has planned I’m sure. And Sawyer?” I stare at him until he reluctantly meets my eyes. “I appreciate you taking Evan under your wing, honestly. Just make sure you and I stay close too, alright?” I give him a pleading smile. I’d really miss Sawyer if we grew apart. 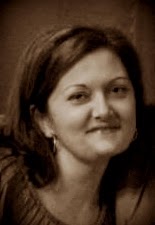 S.E.Hall resides in Arkansas with her husband of 17 years and 3 beautiful daughters. When not in the stands watching her ladies play softball, she enjoys reading YA and NA romance.
SOCIAL MEDIA LINKS