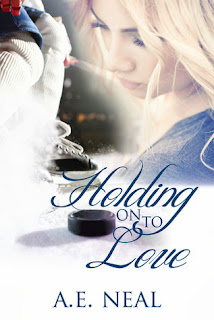 There is always a moment in your life when you have to break up with the past in order to move on...

Allyson Monroe has everything she's ever wanted out of life. She has a promising career, a brilliant best friend, and she's engaged to the man of her dreams. In one heart wrenching moment, Ally’s perfect world is turned upside down. As she succumbs to the heartache and tragedy that has left her utterly devastated, Ally relies on her best friend’s support more than ever. Eventually, she begins to pick up the pieces of her shattered life and move forward. However, the one thing she can’t seem to repair, is the huge void left in her heart.

Local hockey star and bar owner, Brody McCabe, has had many titles bestowed upon him in his life — "Nice Guy" was never one of them. After a horrendous childhood, the only kind of love he seems to be capable of, is that of material possessions and his three staples — women, whiskey and wealth. Brody is completely unaware that the universe plans on handing him the hat-trick of a lifetime.

After a chance encounter, Allyson and Brody are baffled by the heated connection they have towards each other. Will they be able to overcome the tragedies of their pasts, or can they hold on to a new love and a future together?

~Brody'~
Zac jumped up from the couch and grabbed her by the arm. She's fucking that asshole? I thought to myself briefly before my question was answered.

"Come on, sis. This is a night to celebrate! Brody just offered our band to play here exclusively for the next year. Fucking awesome, right?" Zac said.

"Yeah...great. That's awesome," she said with a plastic smile.

Bit by bit, I could see my little project turning into an even larger one every time she spoke or glanced at me. I couldn't quite put a finger on it last night, but something about her was all too familiar. My wheels turned as I tried to remember where I'd seen her or met her before and I kept coming up empty. It was going to drive me insane.

She leaned into her brother's hug and I saw Zac whisper something to her. For a moment, I imagined her gripping me tight while I buried my cock in her. I smiled.

She cleared her throat and spoke loudly, "Alright, I'll come. But can you put the dog out next time? I wouldn't want to be exposed to any fleas...or STD's, for that matter."

What. The. Fuck? Did she really just direct that at me? Alright, Sweetheart. You wanna play that game? I'm all in.

I felt my heart race and let out an unnecessary growl before responding. "Well, excuse the fuck out of me. I don't believe I've had the honor of making your acquaintance, Sweetheart," I scoffed. "My name is Brody and I am the owner of this fine establishment." I opened my arms wide to show her what exactly belonged to me. 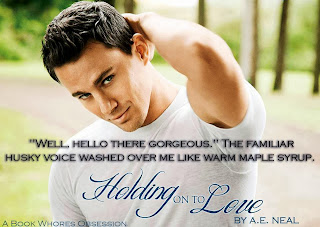 Holding On To Love is A.E. Neal's debut novel. The Prologue lays the ground work for a beautiful love story. We get a glimpse of Ally's life three years before Holding On To Love takes place. She is a recent college graduate and embracing the beginning of a life she has been dreaming of for years.

In present day, Ally is an up and coming journalist working for a local publication. She is a strong young woman enjoying life one day at a time. But sadly we quickly learn, Ally has overcome not only one but two life changing losses. Ally is very likable and I believe you will easily connect with her.

Brody is a professional hockey player and also owns a bombing night club. Brody is the total book boyfriend material! He is the HOT alpha male that makes you weak in the knees with just his swagger and amazing eyes.

The heat and chemistry between Ally and Brody is undeniable. From the first moment they laid eyes on each other you ache for them to connect.

"holding my gaze with those beautiful green eyes for a moment before looking over the crowd.....The heat spread across my cheeks and my heart continued to thump in my ears."

I really enjoy the story up until about the half way point.  I felt the second half of the book laid the ground work for the sequel and just had too many things going on.

I was on the edge of my seat for Ally and Brody to finally cave into their attraction. Both characters have suffered great loss and deserved the deep love each are capable of giving. This is a "to be continued" story. It isn't a cliffhanger but Brody and Ally definitely have more let in their story.
For me, this book was a 3.5 star read.

A.E. Neal is the author of Holding On To Love. She began working on her first NA Romance novel in January of 2013, it is scheduled to be released September 23rd, 2013. She lives in beautiful Colorado with her family and enough pets to start her own zoo. She enjoys crude jokes, new adventures, good friends and great stories.