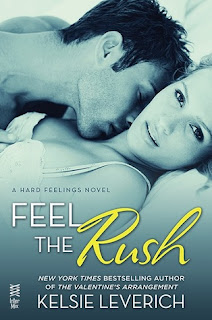 Picking the wrong men is a talent Meagan Mitchell has perfected. She’s sweet, confident, beautiful—and single. With her thirtieth birthday sneaking up on her, she needs a new plan. No more Mr. Wrongs or Mr. Bads, it’s time to find Mr. Safe…

Army Captain, Reed Porter, lives for the thrill—he’s an Airborne Jumpmaster with a rush addiction. He’s sexy and playful, and he quickly tempts Meagan with his rich Southern drawl and sinful looks. But slowing down and settling down are not in his agenda, making him exactly the type of man Meagan wants to avoid…

As their undeniable attraction heats up, Meagan has to decide if she’s willing to risk everything on a chance at love with a reckless charmer. Is she brave enough to bet her future—and her heart—on Mr. Thrill? Or will Reed finally learn that the feeling of a safe landing is just as addicting as the rush of the fall?

BUY FEEL THE RUSH ON AMAZON US / BARNES AND NOBLE / IBOOKS


FEEL THE RUSH ON GOODREADS


“Hey, whatcha doin’ out here all by yourself?” he asked as he sat down on the oversize patio chair that was next to her. Tiny clumsily made his way to Reed and lowered his head onto his lap.

“Just enjoying the last of the lingering fireworks.”Reed took up the hypnotic task of rubbing the top of the dog’s head. “Yeah, have you had a good birthday?”

“I have. Thank you for making the dreadful three-oh not so dreadful.”

“Anything for you, sugar.” His voice had that soft, sleepy, sexy rasp to it, and paired with the Southern drawl that really seemed to make an appearance when he was tired, Meagan was done for—that voice sent a shiver through her body, prickling goose bumps all over her legs—the good kind. “Where’s Eva?”

“Up in our room, more than likely getting her hair pulled.”

Reed narrowed his eyes in confusion. “Luke’s with her,” Meagan explained, and Reed cracked an approving grin as he gave an understanding nod. She returned her own form of an approving smile, hell, she was happy for Eva. “I’ve offered to take the couch tonight.”
Reed’s jaw set tight, his strong eyes boring into hers. “You’re not sleeping on the couch,” he declared his tone not leaving much room for argument.

“Yes, I am,” she protested. “It’s fine. I’m a hard sleeper, I can pretty much crash anywhere.”

Reed lifted his hand from Tiny and leaned back in his chair, crossing his arms over his bare chest. “Okay, then you can crash in my bed with me.”

She sucked in a sharp breath between her teeth. “I don’t think so, Reed.”

He leaned forward again, resting his forearms on the tops of his thighs. The thick muscles of his shoulder flexed, causing Meagan to gawk like a hormone-crazed teenager. Great.

“Look, it’s late. Come to bed. I will be a complete gentleman.” He lifted his fingers in the air. “Scout’s honor.”

Meagan debated her options as she finished the last of her third glass of wine. She toyed with the idea of her body curled next to him. It was tempting, and the thought was very appealing. She had slept in the same bed as Trevor many times—but she was afraid it wouldn’t be the same when she was lying next to Reed. Trevor could curl up behind her and wrap her up in his arms and she would feel nothing but content—no flutter of excitement, no wanton desire to feel more of him. But what if she did with Reed? Actually, she already knew the answer to that question—she would feel those things with Reed, she didn’t need to be in his arms to feel them either. But ultimately, her body’s cravings won out against her pesky internal need to weigh the repercussions. She wanted that contact, even if it was just lying in the same space as him, sleeping.

Reed stood up and reached out for her hand. “That’s okay, I snore.”

“Well, good thing I’m a hard sleeper then,” she said, placing her hand in his, allowing him to help her up. Her legs swayed under her, causing Reed to move his grip from her hand to her elbow as he steadied her.

“How much wine did you have, birthday girl?”

Reed chuckled and shook his head. “Come on.”

Feel the Rush is the second book in the Hard Feelings series.  It is an amazing story with the perfect blend of romance, humor and emotion. I LOVED IT!!!
It is a 5 star FABULOUS read!!!!

We meet Meagan as she is searching for a new direction in her life. Her thirtieth birthday is quickly approaching and she is tired of dating all the Mr. Wrongs! She jumps on the chance at a fresh start as she makes a move with her BFF. Literally on the night she arrives in town she runs into Captain Reed Porter. Only this is not their first encounter, the fact he doesn't remember her is a blow to her self esteem.

"She wanted to find Mr. Safe, but instead Mr. Thrill came bargaining into her life."

At first glance it appears Reed is living one adrenaline rush to the next. He is HOT, an amazing seducer and YEP an the complete alpha male. Captain Porter is the total package! He loves fiercely, he is devoted to his career and oh yes ladies.... he is Mr. Sex on a Stick!

"He memorized her ticks - what caused her to tighten around him, what made her writhe against him. He memorized them, then utilized them - making her tighten and sigh and writhe again and again."

Reed and Meagan have a playful flirting friendship that everyone can see is about to lead to more. Well that is everyone but Meagan. Meagan is searching for Mr. Safe and Reed has no intentions of settling down.

"My heart's torn. Torn between the future I want, and the man I want that future with and I know I can't have both."

Will Meagan realize she has true love and devotion right at her finger tips? Or will she finally push him to the point of walking away? It's a journey you won't want to miss. One of my favorite lines in the book:

Kelsie has a unique writing style that seamlessly weaves us through alternating points of view. She did an amazing job giving both Meagan and Reed just enough depth to their characters as well as some serious obstacles to overcome.
Grab it today! 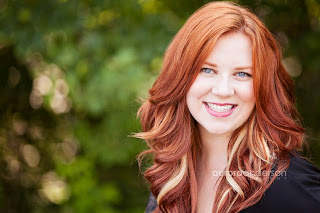 Kelsie Leverich lives in Indiana with her husband and two adorable monsters that are better known as her kids. Her life revolves around her family (to include two dogs and a cat) and most of the time, actually all of the time, it’s a crazy mess—but that’s the way she loves it! When Kelsie’s not writing, you can usually find her on the lake with friends and family or snuggling on the couch with her kids and a good book. Kelsie is not a morning person, has a soft spot for animals, loves musicals, hates seafood, and thinks laundry is the source of all evil.