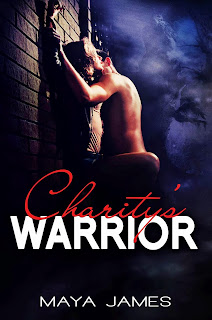 Charity Powers is a young, intelligent woman that has left behind her predictable small town life, and even more predictable lover, to gamble on a fresh start in New York. She arrives with no leads or friends, just an armful of optimism and determination. When an attack at a local bar, a possible kidnapping attempt on her, is thwarted by a stranger, her life takes on an unforeseen turn.

Gorgeous and overly-experienced Justin Collins saves Charity from her attacker, and continues to save her in many other ways. "He's just the right mix of gentleman and caveman,” is how she describes him. He gives her exactly what she wants, and almost everything she needs, but his damaged past makes it impossible for him to commit.

At a new job, she falls into an online relationship with JP, the company’s owner. She hasn’t seen him, but he fills the gaps of Justin’s absences and feeds a fire Justin left unattended.

The return of her ex-lover exposes the dangerous secrets around her—one of these men has the power and connections to keep her safe at any cost, and the endless love for her to use this power or give it up to keep her.

Really, I don't know what it is about taxi rides with Justin. I think it's just the idea of being in a backseat with him, but it wasn't long before all I could think about was ripping his dark polo off of him and unzipping his jeans with my teeth.

Maybe I need a doctor. I love orgasms, but I was never addicted to sex the way I am with Justin.

I laughed at myself and Justin looks at me, wanting to be in on the joke. "Just something about the girls from work," I said, blowing it off. I needed to change the subject. "What do you do, exactly; you've never mentioned your work?"

In the glow of the street lights, I turned and looked at his face. He looked right back at me, smiling.

"Yes, it's boring and that's why I never bring it up," he said, laughing.

I was still giggling when I said, "Then tell me something not boring about you." I grabbed the inside of his thigh with my hand and used it as leverage to pull myself closer.

"Okay," he started, "how about the fact that you just slid a little closer to an ex con?"

I don't know what to say to that.

Justin laughed at me. "Got you stumped now," he said. "Don't worry, it was a stupid thing I did as a kid. I was going through some stuff."

Thanks to Lena, I believe I knew exactly what he means by that.

"What did you do?" I asked, secretly excited that he was opening up to me.

He sighed. "I beat up my cousin—but I promise I had a good reason," he said quickly, defending his actions. "I was living with my aunt and cousin at the time. My father had recently passed away, and I was having an extremely rough time with it. He was all I had, my mother was a failure, and she was gone. My dad, that was hard."

I squeezed him, letting him know it was alright.

"My aunt was the only family around, so I was sent to live with her and her brat. My cousin and I had already hated each other by this point, but I didn't have a choice. I suppose he didn't either, but that was no reason for what he did, the things he said to me. I could take him talking about my mother, but he had no right to put my dad down, none at all," he said.

The sadness was still in him, flowing in his veins. It breaks my heart.

"He could have just left me alone," Justin continued. "I was afraid of him. He was older and bigger, he went his way and I went mine, and I liked it that way, but this time he went out of his way to get me. The day he called my father a quitter, said he was in hell where he belonged, I lost it. He was in the hospital for a week, ended up needing reconstructive surgery on his broken cheek. I saw him not too long ago; his eye on that side still looks crooked."

"He deserved it," I said, taking up for Justin. "He asked for it and he got it!"

"See, that's what I said," Justin added, smiling, and glad I saw it as he did. "But my aunt and cousin, and the police, they didn't see it like that. I was close enough to seventeen to be charged as an adult, but since my aunt kicked me out, and I had no prior record, they sent me to a boy’s home and then a city group home until I was eighteen."

The oddest expression settled on Justin's face. If not for my talk with Lena today, I wouldn't have had a clue what it was—relief! He'd just exposed a side of himself he kept hidden from everyone, a test to see if I would handle it, which I did without bringing his world down around him.

Now was not the time to pry for more, he had exactly what he needed from me, so I changed the subject.

"If you're around tomorrow, I may need help bringing in all my kitchenware. You came in pretty handy tonight," I teased.

He dropped his hand into my lap. "Handy, really? I'll have to see what else I can do for you tonight."

The driver pulled over in front of my hotel and yelled the price back to us. Once again, Justin wouldn't let me pay. I argued, but he was not having it. He paid and I led him into the hotel, crossing the lobby with my hand tucked in his.

At the reception desk, I glanced and caught the woman at the counter smirking at me. She's been watching me come and go alone for the last three weeks. She knows exactly what I’m doing tonight. I ignored her and headed for the elevators.

Justin brushed my hand away from the buttons, not letting me press to go up. He hit the down arrow instead.

"Have you seen the garage they have under here?" he asked.

"What are you talking about? Why does the garage matter?" I asked, annoyed that he is wasting our time.

An elevator arrived and he pulled me on, ignoring my questions and pressing “G3.”

The doors closed. "Justin, what are you doing?" I asked again, secretly curious at his surprise.

He smiled devilishly. "Just what I said, showing you their garage."

The doors were opening already, into a dimly lit parking garage as promised. Beyond the elevator doors on the left, the wall was painted green with a huge, white "G3" in the middle of it. Justin led me out, the clapping of our shoes echoing almost endlessly in the quiet space. There was no one else down here, unless they were sleeping in their car, otherwise we would hear them.

We wound through the rows of cars on a mission that I didn't yet understand. I have no clue what he is looking for, but he hasn't found it yet. When we had reached the furthest wall, the most private corner down here, he slowed, still ignoring my pleas. His eyes are on the cars, searching.

Finally, he stopped. "This will do," he said, pulling me in between a Chevy Silverado that looked like it was three feet off the ground and a white Alfa Romeo 8C Spider. He pulled me all the way in against the wall at the front of both vehicles, pressing me up against it lightly.

"And what do you think we can do here?" I asked, my voice screaming with excitement and lust despite my words. I don't know what he's thinking, but I desperately want to.

"I think you liked it in the bathroom at the grill," he said. "I think this place is a perfect mix of private and public to see how much you really like sex in a public place. And I think you need to prepare that warrior in you, because in a few minutes your screams of pleasure are going to echo and fill this entire room. You need to be ready because you're about to be fucked on the hood of a strangers Alfa Romeo until either you or the car break down."

New Indie Author with my first Romance novel, Charity's Warrior, published on Amazon Kindle, Creatspace, Barnes & Noble and Smashwords. The next novel in the series, Charity's Secrets is due for Dec. 2013, and I'm very excited to get it out there.

I'm very passionate about writing stories full of love, lust, eroticism, and strong characters entwined around each other in an interesting, suspenseful journey.

East coast born and raised, I'm married, extremely happily, with 4 kids, 3 of which are now young adults (not sure when that happened).

I’m a COO in my technology-based "day job,” which requires a mix of technical and creative writing for both internal and client-facing materials, but it was not satisfying my artistic spirit. Starting the “Charity” series has been absolutely fulfilling and exciting.

My favorite writing takes place on my phone while lying on the Southernmost Beach in Key West, where I try to go at least twice a year.

THIS EVENT WAS ORGANIZED BY
SINFULLY SEXY ON TOUR PROMOTIONAL SERVICES