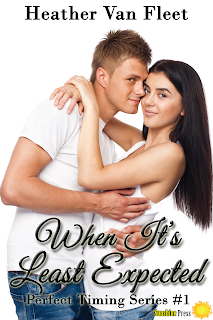 SYNOPSIS
Moving on after a tragedy can be impossible, especially when you’ve been dealing with those tragedies for over two years. But it’s her senior year, and Harley Anderson is more than ready to do just that, even though the skeletons in her closet can’t exactly be hidden.

Enter Mason Daniel, the egotistical, sexy, surfer boy from California. A boy with his own hidden demons, and an even bigger secret agenda. Mason isn’t right for Harley. He knows this better than anyone. He’s the epitome of a runner, a guy who takes what he can get, only to split a short while later. But he can’t deny the emotions that Harley brings out of him, so he’s going to break his rules for once.

He should have known what it would lead to…

Two kindred souls, both lost and then found. Will they fail in their search for contentment and happiness, or will they instead find true love when it’s least expected?

Recommended for 16+ due to some language, underage drinking, and slight sexual content

BUY WHEN IT'S LEAST EXPECTED ON AMAZON /

Mason’s heart raced, his hands trembled. His mouth went dry. Finally, she turned around, and shit…there was no way he could tear his gaze away at that point.

Damn, when had he turned into a creeper?

Her profile appeared first as she dug her slender hand into some wallet thingy. And then boom, she finally glanced up at him.

He gaped, and then he blinked. Holy…shit…the girl…was a goddess.

His body numbed, his eyes bugged from his head. The breath in his chest was lost in that stunned sort of way, just as the sexy as sin creature, with the chocolate brown eyes, glared back at him. Mason blinked again, this time his jaw practically became unhinged. He knew he should look away, or maybe at least wipe the drool hanging from his mouth, but he was too frozen in place to a damn thing.

“What the hell are you staring at?” she snarled. Her upper lip curled on one side, Elvis style.

Damn… Who knew grimaces could be so sexy? She owned that grimace – worked it like a sex slave. Like a love sick puppy, Mason found himself grinning back at her, only to get assaulted with more nasty words from that pretty full-lipped mouth.

“Umm, are you going to answer me sometime tonight, pal, or are you just going to stand there, grinning like the idiot you most likely are?” She finished wiping off her hands with some sort of napkin before she moved in closer, stalking him with fierceness in her hateful eyes.

The site of her body coming near should have had Mason running, but he didn’t. Couldn’t was the better word. He needed to be near her. Hell, he needed to touch her… He tucked his hands back in his pockets to keep from doing just that. He had to get control before he did something stupid.

“I couldn’t help but notice your little problem, so I thought I’d be your knight in shining armor tonight…” he winked. God, where did all his game go? He wanted to smack his own face, but he was too distracted by the sudden appearance of her barely there freckles across her cream colored skin. In fact, the closer she got to him, the harder he tightened his fists to fight off the freakish urge to reach out and play connect the dots with them.

He shook his head, clearing his pussy thoughts, taking a breath to steady his voice at the same time. He wiped a damp palm down the front of his face. There was no way some little midwestern girl, with hair that resembled midnight ocean waves, was going to get to him.

“Wow, I’ve got my own very own hero here, Abs. Why ever didn’t you tell me?” She tried her hand at an Alabama drawl, fanning her face at the same time. Her attitude should have turned him off, but damn if it didn’t draw him in more.

“Hey now, no need to get an attitude with me, Little Beast,” he replied, digging the lost key chain from his pocket. Her eyes narrowed down at his hands, reaching out to swipe it from him. He grinned, holding it above his head. No way was he letting it go that easily.

It was play time.

Heather Van Fleet currently resides in northern Illinois, with her three daughters, Kelsey, Emma, and Isabella, and her fabulous hubby (and high school sweetheart) Chris, with whom she’s been blissfully married to now for ten plus years. She’s a stay at home mom by day, and an avid and completely obsessive writer and reader by night.

Email ThisBlogThis!Share to TwitterShare to FacebookShare to Pinterest
Filed Under: Blog Tours, Teasers