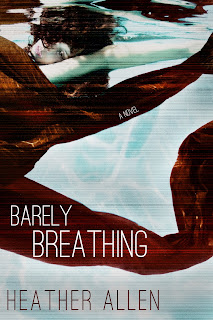 BARELY BREATHING BY HEATHER ALLEN
Synopsis
Ever Harding used to believe in love. That is until she was left heartbroken by the only person she ever really loved, Jack, the mysterious boy from her history class. Little did she know he was born of the sea, on land to watch over her. But was he really? She made the ultimate sacrifice, to live in the sea as a mermaid, for Jack and for love. But she found that in the end, that love wasn't enough.
Now she finds herself alone, having to make a huge choice. She must decide whether to defend others against the choices she has made or fight for the freedoms of a population, she has just become a part of.
Ever's brother James, became a part of the sea not by any choice of his own, but he is willing to embrace it as long as a certain long legged, beauty is by his side. But as his sister found, things are not always as they seem.
In the end what they feared the most comes to reality, the battle, waged between staying true to life in the sea or changing a race of people to become more powerful and diverse. Will Ever and James survive the lines drawn in the sand or will they have to battle each other for what they believe?Little do they know the battle in the end, will be something entirely different than what they were ready for.

This is the second book in the series.  To celebrate the cover reveal JUST BREATHE BY HEATHER ALLEN is on sale for only $0.99.  Pick it up today before the sale ends!