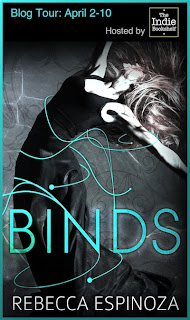 SYNOPSIS
Ophelia Brand’s life is in shambles. Married to an abusive man and forced to act like the perfect politician’s wife in public, her freedom has been completely stripped away. Alone and without purpose, Ophelia feels as if there isn’t much in this world to live for. Everything changes when an employee kidnaps her from a state dinner. Ophelia is thrust into a new world filled with people who claim to be an ancient race of Mages. They also claim that she is one of them.
While the country falls into the hands of a tyrannical dictator, Ophelia finds herself torn between the friendly Reece who wants nothing more than to protect her, and Spencer, the leader of the resistance who sees her as a tool to fight the war. Tensions run high as Reece and Spencer both try to help her master her powers and unravel the spells that restricted her from using them. As revelations of her past come to light, and the war is brought to her feet, Ophelia must quickly make a choice of who to trust.
Binds is the first in a series of adult urban fantasy novels with sexy Mages, a sugar skull army, and an unfortunate set of Hello Kitty pjs.
MY REVIEW
This is the debut urban fantasy for Rebecca Espinoza.  It is a story about inner strength and reaching deep to find it.  We see a woman trapped and abused as she fights her way out of the hell she has been living.  One of my favorite quotes from the book is:
“It’s okay everyone has their weaknesses.  What defines us is being able to acknowledge them and still find our strengths too.”

Ophelia Brand is the trophy wife to public figure Donavan Brand.  He is abusive, controlling and by most people’s standards a monster.  To top it all off Donavan is merely a puppet who is controlled by his father that happens to be an even bigger monster.  Ophelia's life with Donovan is not what she imagined it would be when she walked down the aisle to marry him.  During their dating/engagement Donovan was the ideal boyfriend/fiancé not only was he loving and supportive but he was the center of her world.  In the months after their marriage Donavan shows his true colors and even though Ophelia does have a few failed attempts at escaping her spirit for life is not broken.
The romance triangle that simmers is the whole good guy verses bad guy.  Reece is kind, caring and supportive.  He “kidnapped” Ophelia from Donovan’s clutches and promises to protect her at all cost.  Spencer is arrogant, bossy and the leader of his hidden group of Mages.  He pushes Ophelia to recognize the strengths she has within.  As they are both undeniably sexy Ophelia struggles with her attraction to both men for very opposite reasons UNITL A HUGE SECRET IS REVEALED….
I read a lot of books and often times can put the pieces together by the middle of the book (at the latest).  This book had a few twists that surprised even me.  Although the abuse is disturbing I found the writing and character building to be refreshing.
This is the first book in the series and we eagerly await release information on BONDS.
BUY IT TODAY ON AMAZON 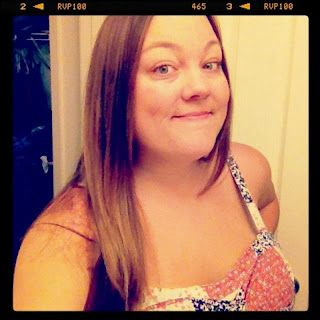 An Army wife, has lived in 8 different houses and 5 different states in the past 10 years and she can’t wait for the next move. She is skilled in the arts of basket weaving, origami, and bullshitting. She is a book thief and likely to pilfer any she sees lying around in friends’ houses, so keep an eye out if you invite her in.
She currently resides in beautiful Wahiawa, Hawaii (Army wives will get this joke) with her two sons and dog, Tosh.0 (her most favorite person in the world…the dog, not the comedian), and her husband pops in from the field, missions, or deployment every now and then to say hello. She tends towards the sarcastic when referring to herself in third person. Rebecca is a Turtle, are you?

Leave a comment below to enter into a drawing for your very own eBook of Binds!!!  Winner will be chosen on FRIDAY, APRIL 12TH.
AND
Head over to The Indie Book Shelf to enter their giveaway.